Fractograf — a term not yet in the Oxford Dictionary — describes a variation on the photo mosaic theme, photo mosaics being a tableau derived from hundreds, or even thousands, of smaller individual images.

That’s at least part of the inspiration behind Fractograf, a new, free iPhone app that bonds photo mosaic, photo/video collaboration and social networking into a dynamic, shareable image. When you magnify a fractograf you’ll see that it is made up of other, smaller images, just like pixels in a digital photo — the company calls these elements fraxels.

A fractograf differs from a photo mosaic in significant ways: It is seamless, friends can contribute to them, it allows beacons to signal different features and it can, itself, contain multiple fractografs.

For example, a fraxel could be just a picture or perhaps a link to a text, audio or video file. Some fraxels may have animations or beacons emitting from them, and when you zoom in and double tap, it reveals another fractograf containing its own fraxels.

There is no limit to the number of levels a fractograf can have. So, people attending the same music festival, for example, can pool their photos together to form a single fractograf and then share it via a social network. 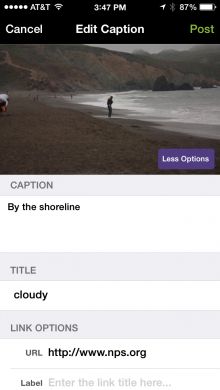 Constructing a fractograf is simple. It starts with a single cover photo. Delve directly into your camera roll or snap new images to add on the fly. The images are instantly color matched, creating a sense of unity.

The app’s bottom menu lets you access all the photo albums you have on your phone and view all the fractografs you’ve created. You can also edit and add to your fractograf after it is posted. Each image can have its own caption, and friends who have permission can add or remove images from the work.

Social sharing and collaboration is fun, but Fractograf doesn’t force the issue. You can still have a one-off creation of your own images without any help, and in that case, you can simply share your creation with friends and family via the usual social networks where others can follow, favorite and comment.

If you combine one fractograf into another, you can select a beacon shape whose animation will signal to viewers that there’s another fractograf in the image. When you post a fractograf, it joins others on the company server where you can decide who can see them.

Fractograf is optimized for the iPhone 5 and requires iOS 7.