Location-based social network Foursquare has announced partnerships with Visa and Mastercard which will expand its check-in deals service and potentially increase its revenues, AdAge reports.

The company first began offering the program — which lets regular users enjoy discounts and offers at selected retailers — two years ago, but it initially only partnered with American Express. Foursquare takes a cut of any transactions made via the program, which makes it one of the company’s most promising revenue streams, and now, with two major payment firms aboard, it is opening it up to millions more users in the US in a bid to increase its income. 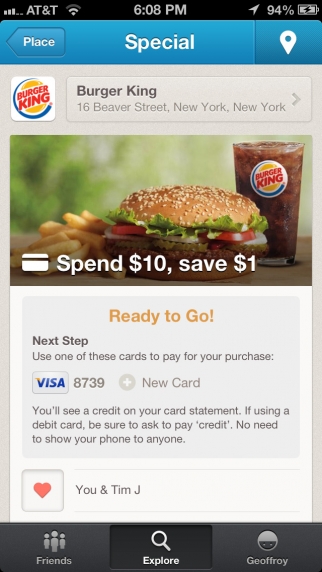 The original tie-on with American Express began as a marketing and promotional strategy to raise visibility of the young service but, over time, it developed into a more lucrative alliance.

Foursquare product manager Noah Weiss told AdAge that the deal Visa and Mastercard is “going to be a pretty core part of our revenue model going forward.”

The company has been criticized in the past for struggling to monetize its platform, but it hasn’t put all of its eggs in the deals basket.

Foursquare piloted an option for brands to pay to promote their presence within the app, while it offers a premium version that provides analytics and other intelligence to help brands better understand how their users interact with them on the service.