It’s not often you’re among the youngest people at a tech product launch, but so it was this morning as Simplicity Computers launched its Home Key operating system.

The system is designed to present the most commonly used functions on a computer in the simplest way possible for people who have not grown up with computing and are put off by the offerings on most machines.

Simplicity Computers was created when former Blue Peter presenter and BBC Radio 4 host Valerie Singleton OBE had lunch with an IT professional and a company director to answer the question, “Why is this so complicated?” The firm now provides computers with accessible keyboards, large screens and more importantly a way to use the machine’s software easily.

Home Key is a 16G flash drive with an entire OS on it and room for storage. One of the nice features of the set up is that it can be booted from the key over an existing system so you don’t need to buy another computer, you can share one that might run more complicated software.

Singleton presented the case that elderly people across the UK are not taking up computing. Often younger relatives will buy them a computer but they are not available all the time to help with IT support. A solution that provides some independence is required.

Though there are indeed ‘silver surfers‘, part of the problem with enabling pensioners to use computers is the expense. Even the cheapest new laptop is going to take a big bite out of a weekly pension instalment.

The process of booting from a flash key also means that computers up to 8 years old will run the system so there is an opportunity here for companies to consider donating old laptops to care homes and individuals. The software can also be booted from a CD or floppy disk.

Easy on the eye

The initial interface, called ‘the envelope’ shows a top level menu of choices, email, Web browsing, documents and photos and tutorials. Singleton says that a lot of attention was paid to the choice of words for each part of the menu in order to create clearer navigation. The colours can be changed to suit people with disabilities like dyslexia.

The use of human terms rather than traditional filing words also goes some way to make things easier. Managing Director Nigel Houghton says, “When people come to use a computer for the first time, they are not familiar with icons, but most people can read the words.”

The tutorials are a combination of written instructions and videos presented by Valerie Singleton. For many people the presenter has been teaching us to do things since we were children and so she is a good choice for a guide. The instructions cover all sorts of areas including how to use a mouse, touch-screen, the system itself and processes like writing an email or creating a document.

There is also a suite of games and exercises in the tutorials area, following a snooker ball on a table with your mouse might seem easy to many of us, but for those who don’t have the muscle-memory and people with arthritis or problems with accessibility, the practice can come in handy and it’s a safe environment where users won’t affect files or anything else.

You’ll note on the screen capture that there is also a link to Skype and Houghton says that the communications program is very popular in care homes. People are not always available to visit and more people live further away from parents and grandparents. This addition can help users to chat with their friends and may go some way to help elderly people who experience loneliness.

The system runs on Linux Mint and Simplicity Computing built its own software for email, browsing and word processing. There are ‘advanced’ areas where users can work in Firefox for Web and Open Office to write documents too.

For a fee, those who buy the system can also get phone support when they need it. Houghton notes that the phones for the support area rarely ring, which is a good sign that those using Home Key are getting along with it well. 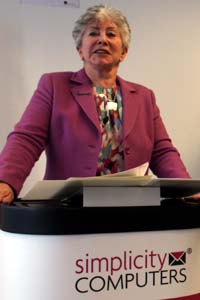 Singleton has pursued many different careers over time, from presenting Blue Peter, providing news for BBC Radio Four, Nationwide and The Money Program. “I’ve done so many different types of work, but I never expected to start a business in my seventies,” she says.

Though she is clearly a source of business acumen, she also admits to finding some aspects of computing a bit difficult. That said, Singleton does not use platforms like Twitter, preferring email for her main portal of communication.

Overall the system is pretty impressive. It boots up works quickly, is easy to install and even when you are accustomed to more common operating systems, it’s not hard to work out what to do. The presentation is clear but still sophisticated enough not to be patronising, people with a wealth of life experience do not need to be patronised and Home Key does a good job.

The company appears to have created a system that works at the right price point of  £69.95 or £89.95 with support, it is still cheaper than a laptop.

The question remains how best to get this into the hands of people who could best use it as though they are always welcome, not so many pensioners are reading the tech sector press. Let’s hope there is room for placement in Saga Magazine and on daytime TV.