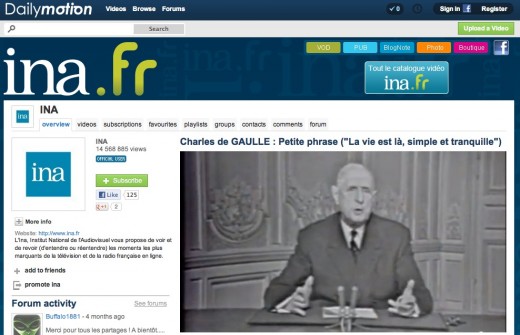 In one sense, this partnership isn’t a surprise; not only does the Institute makes a large number of videos available for free on its own platform, but it also has a similar deal in place with YouTube’s French competitor Dailymotion.

However, what makes today’s news particularly interesting is that the Institute sued YouTube about a year ago – and won. The lawsuit was a historic defeat for Google’s video platform, which was sentenced to pay a $150,000 fine for “counterfeiting”.

In this context, it could be surprising to hear that the parties are now partners – but it also makes sense. When the Institute sued YouTube, its purpose was to fight illegally uploaded content, which represented a threat to its revenues. Following the sentence, which also condemned YouTube to take measures to take down such content, the video platform naturally became another potential monetization source for the Institute.

Yet, this isn’t only about money; as a public utility company, one of the Institute’s key missions is to make its content available to the general public, which naturally encourages it to be platform-agnostic.

As for YouTube, this deal represents the opportunity to target its French users with relevant content, which is part of its global effort to offer local content in each of the countries where it operates.

In other words, this partnership will likely benefit both parties, and this is also good news from a viewer’s perspective. As you may know, the Institute’s archives are very rich and diverse, ranging from old reports from Cannes Film Festival and the Tour de France to interviews with Salvador Dali, spanning over the last 60 years of French TV.

Don’t expect to find all 57,000 videos on YouTube just yet, though; the content included in this new partnership will progressively go live over the next weeks, the French media reports.