It’s hard not to wonder about the role technology plays in our society, especially now as gadgets continue to take over functions that were once held by many simpler objects.

But aside from ushering in a new age of convenience and connectivity — eradicating many stand-alone devices and objects along the way — emerging technology has the potential to serve more sensitive, emotional purposes in our lives. This concept has been emerging out of Japan more than anywhere else as of late, and I can’t help but be fascinated by it.

Last month the cuddly Babyloid made waves, designed to be an interactive robot that helps relieve depression in lonely senior citizens. And before that, there was the robotic guide dog and a kiss transmission device that simulates a steamy make-out via the Internet. Now, we have Paro, a fluffy robotic seal created to help ease the pain of Japan tsunami survivors. 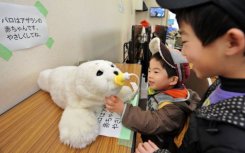 Paro is being given to children and adults living in temporary houses erected inside a baseball stadium in the town of Kesennuma (which was hit by a tsunami last March, killing 19,000 people). The device “is offering a much-needed bit of affection with his burbling noises and the appreciative flapping of fins when he comes into contact with people (Bangkok Post).”

“It’s so cute. It coos when I rub it,” said 10-year-old Kosei Oyama, “Because of the tsunami, we have fewer things to play with than before.”

Tsuyako Kumagai, a 47-year-old housewife, said her friends in temporary houses are happy with Paro as a substitute for the pets that were swept away by the gigantic waves.

“Many of my neighbours don’t want to have new pets because they don’t want to remember,” Kumagai said. “For them, pets used to be their family.”

The seal works with tactile and audio sensors, and it appears to be making a real impact on victims. It’s hard to believe that developing and manufacturing a robot can serve a greater role in mental health than simply spending time listening and talking to each other, but in times of stress, I can see how this sort of device plays a role in the healing process.

As far as I can tell, the seal has been in development in various incarnations for a number of years (even as far back as 2007), but this is the first time they seem to be in widespread use. Are robots like Paro helping to connect humanity, or are the results too artificial to pose a real solution? Feel free to share your thoughts in the comments below!

Thanks to @serkantoto for the tip!