Flickr wants even more of your mobile photos, with its new iOS and Android apps which launched today.

The company has redesigned its entire app to look and feel more like your camera roll, to encourage you to upload the entire thing, rather than just the best bits.

With Flickr offering 1 terabyte of storage to all users for free, this move is an attempt to encourage them to make the most of it.

Automatically uploaded photos are shared privately by default, but Flickr makes it easy to quickly share the best shots publicly to your profile. 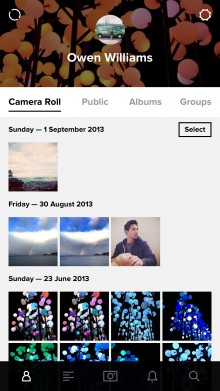 A new timeline view shows uploaded photos in a similar way to Apple’s Photos app, with photos grouped by date. You’re able to quickly edit them with full control using the levels tool along with the suite of editing options you’d expect like exposure, saturation and contrast.

One notable addition is the ability to share photos directly to Instagram, rather than trying to keep them inside Flickr’s walls.

The app was overhauled just a year ago, but the latest update makes it easier to navigate and gently nudges you in the direction of handing over your entire camera roll to Flickr.

Instead of just trying to be a social network, Flickr now wants to be your default photos app. With this latest update, it might actually have a chance to do that.