I’ll be the first to admit that I don’t valet my car. Ever. But it’s not that I don’t appreciate the convenience of the service, it’s that I don’t carry cash and I hate not tipping people in service industries. A new service called Flash Valet is aiming to make the experience better for both the customer and the ones parking the cars.

If you take the experience of Uber as a model, Flash Valet is pretty similar. It’s an app that lives on your iPhone. When you pull up to a valet stand that uses the service, you simply drop off your car, get your ticket and walk away. But on that ticket is a small set of instructions. Those instructions, and what they allow you to do, is what changes how the valet experience works.

Want to get your car delivered at a specific time? Send a text message. Your car’s ready to go? You’ll get a text message in reply. Not carrying cash? You can pay directly inside the app with any major credit card, or via your PayPal account.

On the valet end of things, Flash Valet ends the need for most ticketing and paper systems. Since the valet drivers will be carrying the phones with them, the person running the show will know exactly where they are, what their status is and when cars are being parked or returned. 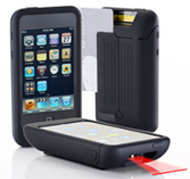 It’s even set up to work as a stand-alone system, so companies who specialize in valet services for events can simply show up, provide their service, then take off when it’s done without the need for costly installations. Since it’s based on the phone, drivers can take timestamped pictures of vehicles to show damage (or lack thereof). Card swipes can even happen on the phone itself.

With a built-in loyalty program, VIN scanning, automated validations and more, Flash Valet is bringing a much-needed update to a business that hasn’t changed very much since it first started. Now all that’s missing is adoption, which will hopefully come fast.