George Arison is the founder of Shift, a platform to bring convenience and trust to the used car market. He also co-founded Taxi Magic and formerly held a product manager position at Google. Before following in love with technology, George spent five years in politics, running campaigns and writing a book.

At the beginning of the year there were high hopes that Congress would pass comprehensive immigration reform. FWD.US pulled the tech community into the discussion of how broken the U.S. Immigration system is, and will remain until revisions are made.

However there’s very little clarity within the tech sector about what exactly is broken – and what should be changed to help companies other than Facebook, IBM, and others grow, and for America to attract and retain real immigrant talent.

Everyone, including opponents of giving legal status to millions of “illegal” or undocumented residents, seems to agree that our immigration system is broken:

The best way to describe the system as it stands – at least in part – is to share my own story. A first-hand look and experience in the insanity of our immigration system.

How the system screws immigrants over

At 14, I was fortunate enough to attend a private school in Maine called Hebron Academy during the waning days of the Soviet Union.  I was the first Soviet student to begin the process going to a U.S. school without being sponsored by a Soviet or U.S. government plan. After high school, I attended Middlebury College in Vermont, received an incredible undergraduate education, and stayed to pursue a career in America.

Though my career began in politics, in 2007 I helped start a company called Taxi Magic, one of those companies that had the crazy idea of letting you hail a cab with your phone. We were a company that put real-world applications on mobile phones before anyone had coined the term “App” or done more than run a very rudimentary version of iTunes on a phone.

I was the co-founder of a company that would eventually lead to an industry cliché. This wasn’t an X of Y. We weren’t derivative – we were revolutionary – and an economic system should focus on keeping these companies and their talent.

For much of my post-college time I was on an H-1B visa, which is a specialty employment visa for individuals with “special skills.” This is a cornerstone of much of FWD.US and other immigration reformists’ thinking – that these basic “worker visas” need to be more plentiful and easier to apply for, as the cap that existed this year (85,000) was filled in its entirety on the first day applications are open. (For the record: there is no question, they should be more plentiful.)

Even if you’re lucky enough to get one, they are, at best, only around six years. Eventually they can, and will, run out – then you’re forced out of the country. 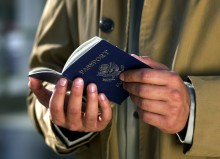 What do you need to stay in the U.S.? A green card. This allows you to be declared as a resident immigrant that can work and live in America without being tied to one job or a period of time. There are various versions – marriage being the most common – and then there are the ones that apply to workers.

Given that I was not married, at Taxi Magic we started the process of getting me a worker green card.  This process is convoluted, idiotic, and bureaucratic. Here’s a brief view into how it works:

When Taxi Magic attempted to demonstrate that they tried to recruit an American to fill the role, they were rejected because I owned too much equity in the company.

This is mind-boggling – I had not only helped create jobs for Americans, but I was helping Americans with our product. In the end I had to do one of the most ludicrous things in my entrepreneurial career: I had to leave the company I had founded because I wasn’t allowed to work at it.

Why would America want to force out true talent?

Fortunately, and tellingly, I was able to get a job at Google, which was able to handle my immigration process in an eerily quick manner. Where a small company had not even been able to get past a step, Google was able to comfortably handle everything, for which I will be eternally grateful.

I had high hopes that the public understanding of our immigration system mess and the disaster faced at the polls by Hispanic voters would scare Republicans into working with Democrats to reform our immigration process comprehensively. America’s most prominent Hispanic, Senator Marco Rubio, led the way and a bill was passed that accomplished at best basic reform.

I can tend to be contrarian, but I’m happy to hear what the other side has to say. In this case I can’t even wrap my head around what the anti-reformists want.

They claim to realize that you cannot deport 12 million people; they are against having people here permanently who cannot become citizens. Yet they are also against reform that would legalize their presence. Disagreeing with reform with no actual solution to help America is detrimental to everyone in a pretty bipartisan manner.

I’m articulately and graphically saying it – comprehensive reform that legalizes millions of people who are here “illegally” is indeed an absolutely necessity.

In short: Dear everyone. Comprehensive reform is dead for now.

Thanks to the delays caused by the recent government shut down, there is no chance the House will take up this bill before 2014. An election year. That makes it unlikely they’ll pass anything then, either.

Our best case scenario is that in 2015 (or, more likely 2017, once a new president is elected), that comprehensive reform is revisited as an issue. In the meantime, we are stuck with a horrible situation in which millions of people are forced to suffer.

That said, there are parts of the immigration bill that everyone agrees could pass, and could pass easily. There are also additional changes that are needed that can help make life of startups easier, and help our economy, which are also non-controversial and could gain bipartisan support. Even the most conservative Republicans are finally moving on one piece of comprehensive reform having to do DREAM.

It’s beautiful and very easy to sound passionate about changing everything, but we need to be practical.

What we can reasonably do right now

First, we need to pass the Startup Act. We need to retain high-quality entrepreneurs and STEM talent.

However, that alone, while a great first step, only addresses the needs of getting founders to move to and stay in the U.S.  There is a lot more that needs to be done.

We must increase the cap on the number of visas that U.S. employers can obtain for “skilled” employees (the H-1B). There were so many applications for these visas that they had to hold a lottery to see who would get them. They oversubscribed. We simply need more of them to keep talent in America – if you miss the deadline, you have to wait another year to apply again.

However, increasing the cap will only go so far – the process has to change.

Finally, if you want an answer (or the visa) quickly, you can also pony up $1,225 for premium processing to speed it up from months to 15 days from filing.

I don’t know how long an application takes to read, but if it takes anywhere beyond four hours, that’s a problem unto itself.

This system hasn’t changed in years. And it’s not getting any easier. FWD.US and others campaign to raise the cap, and I applaud them for it. However, we also need to make it easier for startup founders to understand and execute the process.

Ultimately, H-1Bs should not even be applicable to startups. There has to be a startup visa that is built for and overseen by those with understanding of startups.

The hiring needs at startups are distinct and unique – that’s why we need a special visa, and not because we’re all special snowflakes. We’re just different.

For example, startups work in a great deal of equity-based compensation. For the purposes of calculating “wage requirements” in an H-1B, it’s all about how much cash someone is being paid on a monthly basis. There’s usually a minimum requirement of a wage that someone will receive to get a worker visa – equity doesn’t currently enter that calculation.

Furthermore, startups require people who are have a wide range of skills, with diverse backgrounds and can shift from one set of job requirements to another quickly. Startups pivot and change strategy, and the people need to change with them.

The rigid requirements of employing people for a specific “skilled” job are completely impossible for startups, create an unreasonable amount of overhead, and need to be changed.

This can be easily done by instituting another component of startup visas, for early employees of startups.

We must also improve the path to green cards for technologists of all stripes. PERM process has to be reformed, so that situations like what I went through do not happen.

The ideas outlined above are not controversial. In fact, we’d like to think they would pass easily. Some of them are in legislation already, while others need to be legislated. Even those ideas that are already part of legislative language are being held hostage by those who only want immigration reform passed if it is comprehensive.

Unfortunately, such an approach is making great the enemy of the good.

Yes, it is important to pass comprehensive immigration reform, and for this legislation to be humane to those who live and work in America, and have for years (or even decades) without legal papers.

However, as noble as this goal is, it seems unlikely to have a chance at passage until at least 2015, if not 2017.  We should not prevent other important changes to our immigration system stand in the way while we wait for comprehensive reform.