When I first saw the preview trailer last summer for Mari0 — a clever rethinking of Nintendo’s classic Super Mario Bros. with gameplay and strategy elements from Valve’s seminal first-person puzzler Portal — I was speechless.

Surely this was what the mash-up genre was invented for.

Well, it’s available as of this past weekend. Having taken the game for a spin, I’m happy to say it’s a fantastic first release.

Yes, there are some bugs. Jumps tended to stutter on my 3-month-old Macbook Pro, though according to this forum thread the stutter can be fixed by turning off sound in the options/pause menu. The sound randomly cut out at points, as well: it’s possible the two are related. Ironically enough, when I grabbed a star and became invincible, performance slowed to a crawl, forcing me to quit the game. And it wasn’t always clear whether or not some walls would give when shot with the portal gun; a couple of smaller wall sections that looked like valid targets failed to respond. 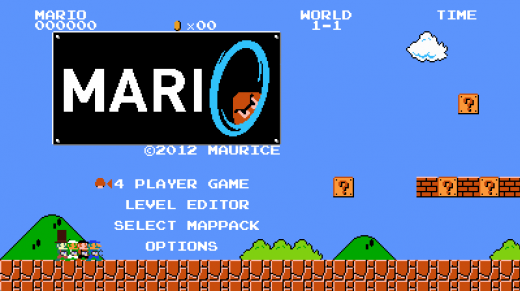 Most disappointingly, the game is unplayable without an external 2-button mouse; left- and right-click are used to shoot the blue and orange portals, as in Valve’s original, but control-click does not register as a right-click in-game.

And be warned: if you’re used to playing Mario with an NES controller, prepare for some frustration while you climb the learning curve.

Tiny annoyances notwithstanding, this is a damn fun game, and the developers appear to be moving quickly with it, having jumped from the 1.1 release Saturday afternoon to version 1.2 as of today.

At the moment players can choose from two different sets of maps: the “traditional” Mario Bros. maps, and (spoiler alert: video below) a completely new set of puzzle maps designed to look like Aperture Labs. While it’s certainly fun to play the original with a gun that lets you shoot holes in the wall, the game really shines when you begin the maps which were designed to take advantage of the portal gun. In this mode Mari0 becomes, essentially, a 2-D version of the original Portals. Light bridges, love cubes, and lasers all feature prominently in the first two levels, which was about as far as I got before losing three lives in rapid succession to an errant laser beam.

By far the most interesting aspect of the game, however, is the ability to run it in multiplayer mode. By pressing right on the keyboard from the home menu, up to four can play at once, though you’ll need some USB game controllers or a gigantic keyboard to pull that off, and there is no online multiplayer yet in the public release. 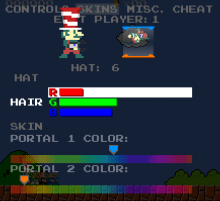 At the moment there are no additional maps available in-game, but instructions are given for installing your own, and if the amount of activity on this maps forum is any indication, I wouldn’t be surprised if a bunch start popping up soon. I’m especially excited for the Hell map and A Dead Aperture (screenshots here). There are also options for changing your character’s hair and skin colors, and best of all, an array of funny hats (including a Dr. Seuss-inspired Cat in the Hat option). The portal color customization is key to ensuring that multiplayer mode doesn’t become a confusing mess, and of course, there are plenty of cheats if you have the tenacity to unlock them.

Mari0 is an excellent first release from a group that has a great track record — their previous titles include Not Tetris, an insanely frustrating free-rotating version of Tetris with realistic physics, and Ortho Robot, a clever 2D/3D platformer wherein players rotate a 3D scene into different 2D perspectives in order to allow the main character access to different areas of the map.

Download the game today and give it a try. If you have any shred of nostalgia left for early platformers, you won’t be sorry. Check out a video of Mari0 below: