Yesterday, Netflix announced partnerships Sony, LG, Samsung, and Vizio for a new line of Ultra HD televisions that will include 4K streaming for Netflix. We tested the latest slew of pixel candies and can attest that quality is pretty amazing – if your home Internet connection’s ready for it.

As part of its 4K content lineup, Netflix has teased “House of Cards” and “Breaking Bad” as confirmed titles to be available in Ultra HD. In a future update estimated for spring 2014, content available in 4K will appear with Ultra HD tags. Users can also search for Ultra HD content via categories – as they would with regular shows and movies.

Compared to regular HD streaming, Ultra HD will eat up more than twice the bandwidth. Netflix told us that the average HD streaming takes about 5.8 Mbps (up to 7 Mbps in some cases). During the demo, Ultra HD streaming took up approximately 15.6 Mbps. Assuming you have the money to purchase a Smart 4K TV, perhaps this isn’t an issue, but it’s definitely worth noting if you want the highest quality streaming possible.

Between the four 4K Netflix-enabled smart TV lineup, LG’s webOS Smart TV stood out the most. Its interface allows you to switch between apps seamlessly instead of quitting one before launching another. You can also flip back and forth between apps (such as YouTube and Netflix) and the content will pick up where you left off. It’s like switching between television channels, and the experience feels more innate.

Picture quality is also great, without the weird floaty effect extreme HD tends to get at times. With a reliable Internet connection, the stream is clean, crisp, and most definitely rivals the movie theater experience. 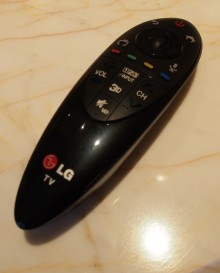 One thing we did note with the LG webOS Smart TV is the motion sensor remote control. Maybe it’s just me, but I still personally prefer keyboards and buttons than hovering over letters to type in a search term.

Start up time also takes a while for the LG Ultra HD TV to connect to the Internet. Hopefully this is a software issue that can be remedied with further updates.

The latest lineup of 4K Netflix-enabled smart TVs will launch internationally this spring. Netflix says it will continue to focus on bringing 4K content to smart TV viewers until computer manufacturers can develop a more powerful processor and graphics card to handle 4K streaming.