This article was published on December 17, 2014

We’ve all lost something. Maybe it was your keys, maybe it was your wallet or purse and maybe it was something of value like a camera or a bike. That’s where the Tile beacon comes in. It helps you find your lost (or stolen) stuff and now its companion app is available for Android. 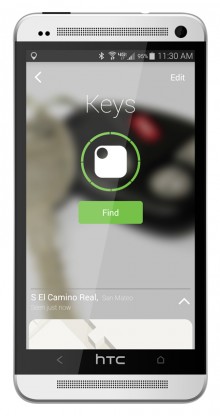 Released today, the new Tile app for Android brings many of the features over from the iOS app. You can add and locate the $25 BLE (Bluetooth Low Energy) tiles. You can even play a little tune when you’ve misplaced the item it’s attached to.

The new app is optimized for the Samsung Galaxy S5, HTC One, HTC One M8, LG Nexus 4, LG Nexus 5. Plus, it supports most Android devices running 4.4 and later and BLE 4.0. If you’re confused by the “most Android devices” the reason is because of the vast array of Android devices out there. For example, the Moto G won’t run the app because of hardware limitations. It’s tough to support every single phone with those specs.

Unfortunately, the app doesn’t yet have the “Mark as Lost” feature. This feature alerts the Tile community that your device is lost or stolen and anyone with the Tile app on their device will passively update the location of the missing anonymously. It’s like having Tile users help search for your stuff while they wander about town. The Tile team tells me that the feature will hopefully be available in early 2015.

Also, due to hardware and software limitations Android devices will only support four to six Tiles while iOS supports eight.

Still, even with the apps not quite reaching parity, the Tile beacons are pretty great. I use them to track my backpack and keys as you would expect. But, I also put one in my luggage and I can usually see if my suitcase has made it on the plane with me before I take off. Of course, it depends on how close I’m sitting to the cargo hold – but it brings piece of mind when I travel.

Finding my stuff is worth the $25.