The Internet is packed full of thriving open source projects, toolkits and frameworks, because sometimes people really love to share their work with others. In fact, one of the best parts about working with the Web is the level of collaboration that occurs everyday.

And just as many people don’t usually roll their own CMS thanks to the folks at WordPress.org, sometimes it’s not necessary to build out every single aspect of your native/Web app manually. Now, when it comes to dealing with the hassles of OAuth, Filepicker.io hopes to have you covered.

Filepicker.io makes it easy for your application to access user’s content in seconds. The team calls it “the next generation file chooser for the web,” and it only requires a few lines of code. With it, any app can quickly access files directly from Dropbox, Facebook, your computer and more. Hopefully, the team will soon be adding other sites as well, like Instagram and Flickr. 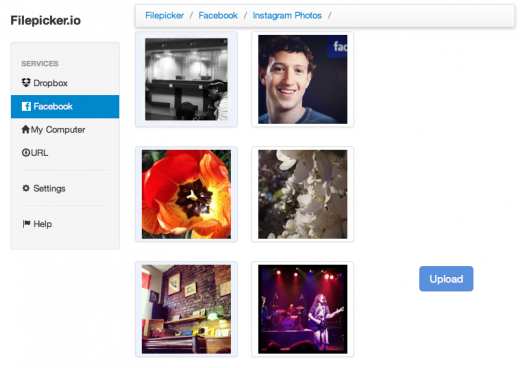 NY-based Aviary, which we’ve covered quite a lot in the past, runs a similarly helpful service that lets developers easily integrate photo editing into their apps. Aviary’s grown wildly over the past year, and Filepicker.io’s humble beginnings have the same potential to help power uploads for developers.

Filepicker.io’s developers, Liyan Chang, Anand Dass, Thomas Georgiou and Brett van Zuiden, all hail from MIT, and have already opened up the service up for free. You can see an example of how the tool works here, or just click the link below to grab a developer key and get started right away.