At the presentation of its tenth batch of entrepreneurs, the 500 Startups team advanced 29 new businesses, hoping to catch the eye of the press and anyone with a big pile of cash.

The adult version of show-and-tell was heavy on sports and fitness, ad sales, local businesses and big data. But only a few caught our eye during the event. Here they are.

After that initial free personal trainer session at the gym, working out can devolve into a hodge podge of random tasks with zero input. Gymtrack wants to fix that by adding its proprietary accessories for hardware, wearable and cloud services. The accessories attach to, or are even part of, the workout equipment. If you sign up for the virtual trainer you get a wearable bracelet that tracks your workout and gives suggestions and feedback about what you’re doing if you sync it to you smartphone.

If you’d rather not workout with a smartphone strapped to your person, the Gymtrack wearable (and soon wearables with Android Wear and from Apple) can track your workout and sync it to the gym’s cloud. The idea is to reduce gym churn by giving members added value. For members, it’s a good way to get personalized input without burning through cash to hear someone say, “just one more rep.” 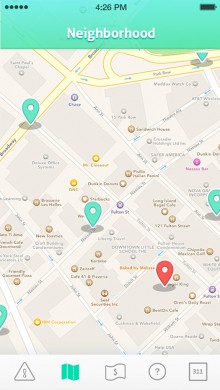 Running a small business is tough. Running a small business while trying to keep up with issues that could hurt the bottom line, like local regulation changes and nearby construction, is almost impossible. The Mind My Business app alerts business owners of these changes to help them stay abreast of the environment in and around their store.

It’s like having a friendly government official send you a text message when they decide to tear up the road in front of your business. The app is iOS New York only where the team has partnered with the city to help local businesses.

Since we’re talking about local businesses, we might as well mention that getting ads on Facebook and Google can be a pain. While the national chains have whole teams devoted to ad placement, the neighborhood pizza place is just happy when it can pack the house on the weekends.

Rain lets you create and target mobile ads for your area either online or via the iOS app. You can see how much your local campaign will cost based on how many potential customers you want to target. It’s like having an ad team to help grab mobile customers from the big guys.

Let’s keep the small business magic going with Shakr, an online tool for creating digital video ads. The service has 500 ad templates that you plug your footage and stills into. Just drag the assets over, add some relevant text, and the service creates a video that can be shared to social networks or embedded onto your site. Here’s a sample video ad:

The videos are free to create, but you have to pay (about $30 to $50) to remove the Shakr watermark and be able to download the video. The 30- second videos are effects-heavy, but it’s better than a slideshow or shaky hand-held shot. Currently the videos top off at 1080p, but Shakr told TNW that 4K video is on the horizon.

A/B and a lab-based UX testing mobile apps can be expensive. UXCam lets developers see what users are doing in their apps in the wild via video. Developers can see where users are having problems and fix spots where they may be getting stuck. This is especially important for ecommerce apps. If a user can’t figure out how to check out, you’re losing sales.

If you’re concerned about privacy, CEO Kishan Gupta says that the service is for beta testers and they will be alerted and asked if they want to participate in a usability study. Sensitive items like passwords can be blocked from developer views.

Almost every tech company has a closet filled with old technology. It’s a pain to get rid of and most of it has sensitive information still sitting on the drives. Revivn takes those old pieces of equipment, scrubs all the data off the drives using department of defense standards and either has the equipment recycled or repurposes it by donating it or using it to build computer labs for underserved communities.

The company says that 65 percent of the equipment it picks up can be reused. Items that can’t be reused are recycled in the United States via responsible vendors who recycle all components. Revivn’s service is currently operative in New York and will soon expand to the San Francisco Bay Area.