This article was published on February 17, 2015

Cally Russell walked onto Dragons Den – the UK’s equivalent of Shark Tank – to show off his app Mallzee, hoping to impress the room and secure an investment.

But when investor Peter Jones made an offer, Cally turned him down and left empty-handed.

Jones said he had a hunch that the app could be the next £100 million business and offered Cally $115,000 (£75,000) for a 20 percent stake. The 27-year-old entrepreneur says turned down the offer because he didn’t want to give away so much equity in his company.

Was this confidence well placed? Yes, it seems it was. 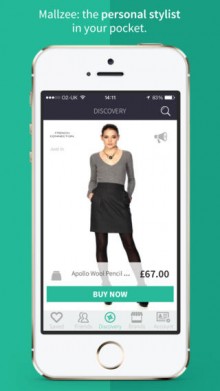 Mallzee has now announced that it has an agreement with Samsung in the UK and Ireland. Under the deal, the app will feature in a number of places including the Galaxy Gifts service and the Galaxy Apps Store.

Inevitably described as “Tinder for fashion”, Mallzee is a personal shopping app that creates a digital profile based on the outfits you like and dislike. Over time it learns from your choices to recommend clothes you’ll like from its database of over 100 retailers.

How well the app learns what users like and dislike will be key to its success or failure.

As part of the new deal, Mallzee will be offering exclusive discounts to Samsung users, starting with 20 percent off at Warehouse.

Read Next: This smart mirror lets you try on different clothes without visiting the fitting room