Making a handset bereft of conflict minerals is an incredibly tricky business, in fact, it’s so difficult that Fairphone, a Dutch company that wants to make a 100 percent ethical device, still can’t get all that close to its goal.

The company began as an awareness campaign about conflict materials, but later grew into a business. It launched a crowdfunding campaign to see if the idea of creating a conflict-free handset would fly. Fairphone’s spokesperson explained more:

We said that if 5,000 people in one month pre-order the phone – put down €325 for a phone that doesn’t exist yet – we’ll do it. More than 10,000 people then bought a phone from a company that had never made a phone before.

With its proof of concept and demand in place, it went to work in getting its first device to market. Which it did, albeit a bit late for some of its campaign backers. To date, it’s sold around 60,000 devices. That doesn’t sound impressive compared to the tens of millions of phones shipped by big-name vendors, but it’s done that with a small team and no advertising.

It’s not so bad within the context of trying to sell 5,000 either.

First time around, the device was a reference model, but the second version will use an in-house design and a Qualcomm chipset to improve the performance and the overall look. It also gives the potential for giving buyers more customization options.

The biggest problem is that the new phone is still not going to be completely ethical, a spokesperson explained to TNW:

It’s far away from being 100 percent fair, we see it more as a starting point. There are thousands of things that can be improved in the supply chain.”

The phone contains over 30 minerals. Those minerals come from all over the world and there are dozens of steps they come through before they become components in the factory. Most of the companies, including us, don’t have transparency into our own supply chains.

Right now, the company uses the Android operating system, but if the aim is to create a 100 percent ethical handset one day, it’ll have to think carefully about the best way to approach its software, as well as the hardware.

In terms of software we want to make it more open and look at privacy issues step-by-step again. The next phone we are releasing it with Android, and we also selected Qualcomm as the chipset manufacturer. That allows us to release Android together with a development environment, so people can rebuild the image and modify it.

Fairphone says it’s looking at using possible alternative OSes in the future, like Firefox OS or Sailfish. It would even contemplate giving consumers a choice of OS when they first switch on the device, if it could. 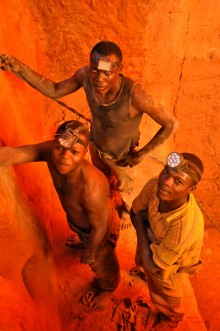 One of the biggest challenges – and most obvious questions – is whether enough people care about where the components of their device come from or how they are sourced. Fairphone thinks they do, but it doesn’t have any delusions over changing the world single-handedly.

To make a change isn’t up to one company and it can’t be done overnight. We’re bringing more transparency and we bring consumers closer to the process. We started to ask questions like where does my phone come from? Who made it, and in what conditions?

By educating people about what’s behind their products, we create more demand for ethical products – and that in turn can inspire the other players to speed up improvements in the supply chain. On the other side, as a small player we can experiment more in our own supply chain […] to see what works and what doesn’t, and then others can adapt the models that work in their supply chain.

It’s a long road to go from being an awareness campaign to a fully-fledged handset maker, one that’s made all the longer by Fairphone’s desire to expose every link in the chain. With component makers reluctant to provide full disclosure on every aspect of the production, it remains to be seen whether a 100 percent ‘fair’ phone is an achievable goal, but it’s certainly a worthy one.

Fairphone’s second device is set to arrive this summer, but specific pricing and dates are currently unknown.