According to the Facebook Developers Blog, Facebook has been driving some serious mobile traffic to apps and games. Out of the social giant’s 425 million monthly mobile users, as many as 60 million are driven to apps created by 3rd party developers, adding up to a whopping 14% of Facebook’s total monthly mobile traffic.

Facebook has also revealed that mobile visitors were responsible for more than 320 million visits to mobile apps last month. “BranchOut, for example, a social-professional networking web app, sees more than 350 thousand visitors from Facebook mobile every day. This traffic has already grown by a factor of twenty since the start of the year. And Diamond Dash, a native iOS game by Berlin based developer Wooga, sees more than 1.9 million monthly visitors to their mobile app from Facebook.”

Many of the developers benefiting most from Facebook Platform are those building mobile Open Graph apps. Timeline apps integrated with Open Graph are all about sharing moments in your life through the use of objects and actions posted to the Open Graph. And since many of the exciting activities in our lives happen while we are out and about, it is only natural that many of the interesting Timeline stories are those captured via mobile apps. These activities start discussions among friends that can drive more installs and engagement with the apps that make these conversations possible.

Foodspotting is a great example: a native app that lets people find, record and recommend food dishes. Using Single-Sign On and integrated with Open Graph, Foodspotting have seen a three-times increase in the number of visits and activities shared on Facebook. 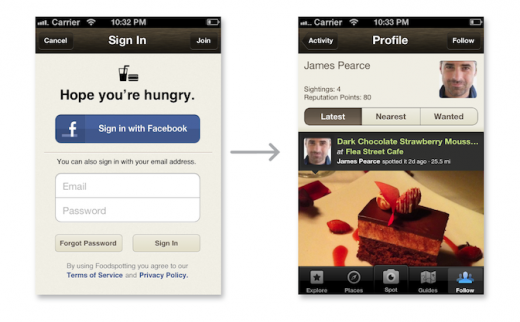 All in all, tons of apps are seeing massive growth since they integrated with Facebook Platform and implemented Single Sign On, boosting total referrals by an average of 300%. For developers, this means it’s about time to jump on the bandwagon while the getting’s good, so long as they’re careful not to anger users with spam.

The major risk here is having to find the balance between spam and growth, as the Facebook Platform becomes more crowded over time. Whether this growth is sustainable or not is still unclear, but at the moment, the results have clearly been phenomenal for many 3rd party developers — all while strengthening Facebook’s stronghold as a social platform.