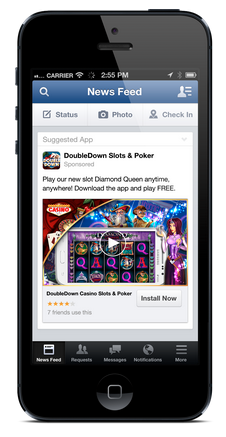 Previously, when mobile app install ads were being used, they were purely static images, all designed to entice users into download the app. But now, video files can be used whereby customers will click play to watch a video that features the mobile app. Facebook says that this new creative has “proven to be an effective way to drive engagement in News Feed” and that it started experimenting with it using the DoubleDown Casino app.

In addition, advertisers can now take advantage of the cost-per-action bidding model that Facebook claims will simplify the buying process for its mobile app install ads. Until recently, one could only buy based on a cost-per-click or an optimized cost-per-impression model. That never really gave advertisers the bang for their buck because all that tells them is how many people looked at the ad, but not actually following through.

Facebook says that developers will only be charged when a user downloads and installs the app. Through its internal testing of eight advertisers over two months, the company states that buying on CPA drives “on average 20 percent lower cost per install than buying on CPC.”

Mobile app install ads first made their appearance on Facebook last year as a means to encourage users to download partner apps. The company touted that the ads would drive more installs directly through its ad platform, saying that in its trial phase, it saw a 50 percent higher click-through rate and 8-10x reach.

Since then, mobile app install ads have been increasingly simplified — only requiring an App Store URL to create placements and then earlier this month, enabling advertisers to customize their ads to better drive user engagement.

These two features will be rolling out over the next several days.