Facebook’s Offers service may only be a couple of months old (and only available to select number of partners) but the sheer size of the social network has proved difficult for one small business owner, with 3 million people engaging with an accommodation deal that offered just 50 vouchers.

The deal was placed by Tasmanian eco-resort Huon Bush Retreats, offering 50 vouchers as part of its Facebook Offer.

It allowed customers to book a room a a rate of $99 per night for three nights, resonating with many Australians as they not only redeemed the voucher, they also shared it with their Facebook friends — reaching over 3 million users in total.

Initially, only users that had ‘Liked’ the company’s Facebook Page were able to redeem the Offer, but the social network is automatically primed to share the redemption of such a deal (but also by users who stumble upon it and opt to share it on their News Feed), explaining how it was able to expand to such a wide audience.

Facebook’s lack of press around the Offers service appears to have been its downfall, not only for the social network but business owners too — one small Northern Irish hotel recently saw one of its offers claimed over 28,000 times in 24 hours.

Many users were seeing the Facebook Offer pop-up on their News Feed but because the service had not been widely publicised, many believed that it was a spam message or that their friends accounts had been hacked. This resulted in some users turning their frustration to Huon Bush Retreats. 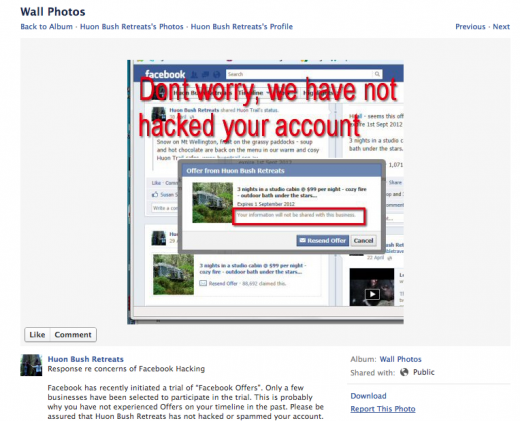 “This is probably why you have not experienced Offers on your timeline in the past,” said Paul Dimmock, the company’s owner, on its Facebook Page, “Please be assured that Huon Bush Retreats has not hacked or spammed your account.

“We apologise to anyone who finds our offer to be offensive. However there is nothing that we can do to change this. Only Facebook has control of how Offers are distributed,” he added.

The rush for deals mirrors that of daily deals pioneer Groupon, which was accused of sending too many customers to small and medium-sized businesses that were unable to accommodate demand.

With Groupon, all businesses had control over how many deals they could offer but some underestimated just how many would be redeemed. This left companies in a position where customers had paid and awaited their orders but they didn’t have enough staff or couldn’t output enough orders to cater for all their customers (negatively impacting their brand).

Dimmock said that of the calls he received, 10% of them were “really abusive”, another 10% “seriously concerned” because Facebook didn’t warn of the trial, and 70% actually wanted to book the deal and tell their friends.

Unsurprisingly, Dimmock decided he would extend the Offer.