Robots are better at basically everything, right? Facebook seems to think so and has a new feature released today that automatically enhances the photos you upload to the social network. 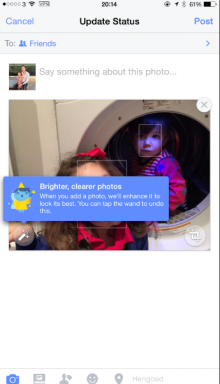 Most people need help with their photos, so Facebook’s new tool automatically improves a photo’s brightness and attempts to make it look clearer without any input from you.

Facebook is so sure that you’ll prefer its enhancements that you’ll need to tap the wand every time you start to post a photo to stop the network from “improving” your images if you don’t like them.

The new feature became available today, but there wasn’t a new update in the App Store. It’s not anything quite as magical as Google+ auto-awesome feature, but might make there be a few less terrible shots.

You can disable the new automatic improvements in the app’s settings under Video and Photos if you’d prefer to have control over when photos are improved.

Update: Facebook let us know that you can disable the functionality if you’d prefer it didn’t automatically improve your photos.