Update: Facebook has pulled the video from its Newswire page. We’ve included a censored screenshot of Facebook’s post in a gallery below.

Facebook’s editorial team has come under fire before, but this time its thirst for breaking news might have crossed a different line. While it may think of its Newswire as a service for journalists, plenty of onlookers also follow it, and didn’t like a video posted of the aftermath in Nice during Bastille Day.

An Instagram video of the aftermath in Nice, where a truck plowed through a crowd killing innocent citizens as they watched fireworks in celebration of Bastille day, was picked up by Facebook’s Newswire Page, which is curated by Storyful. Even the French Interior Ministry asked that people not share graphic images.

While we caution against  viewing the image in the gallery below due to its graphic nature, several in the comments section of the original post have taken Facebook to task for posting the video. Many believe people in the video are identifiable, and that showing their injuries — or worse —- is disrespectful to their families. 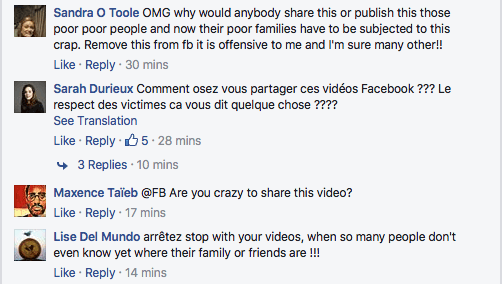 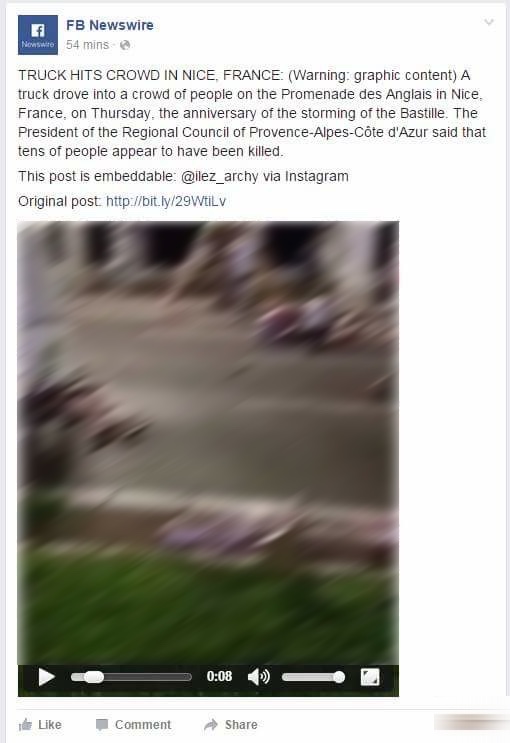 I’d have to agree. The video was apparently posted in haste, and expecting an Instagram user to censor a video is just not reasonable. Facebook’s Newswire Page editorial team could have also censored the video itself and re-posted with accreditation to the original Instagram user.

But Facebook’s Newswire Page chose to try and keep up with Twitter as a breaking news source, and that’s clearly not what its users want from it. Even Twitter is throttling back.

@MattNavarra it’s all over Twitter too. I raised it with the moments team earlier this evening and they’ve responded by tighter curation

There’s also some curiosity about Facebook’s decision to control content on its platform. Its reasoning for pulling a video of the Philando Castille shooting in Dallas didn’t hold water, and we’ll have to see whether or not there’s a similar instance here.

Twitter is a breaking news source, and is raw and often uncomfortable. Facebook shouldn’t be, at least not to this degree. It can — and should — do better.