I’ve never been able to get into 3D movies and TVs because fitting 3D specs over my prescription glasses never worked. EyeFly3D created a screen protector that can display stereoscopic content on your iPhone, iPad and Nexus 7 without having to use those pesky glasses.

The iPhone protector will set you back $26.95, while preorders for the iPad Air version cost $59.95. Creator Nanoveu announced an iPad mini and Nexus 7 version at CES, but it hasn’t begun taking orders for them yet.

The product works by incorporating 500,000 nano-lenses onto the screen protector in order to provide your left and right eye with the images necessary to create the stereoscopic effect.

Installing the screen protector is slightly more difficult than applying a standard film, as you’ll have to use the EyeFly3D app to align it. The app projects an image of lines that you’ll need to adjust as vertical before sticking on the protector. You can use the included piece of tape to act as a hinge once you’ve got things aligned. 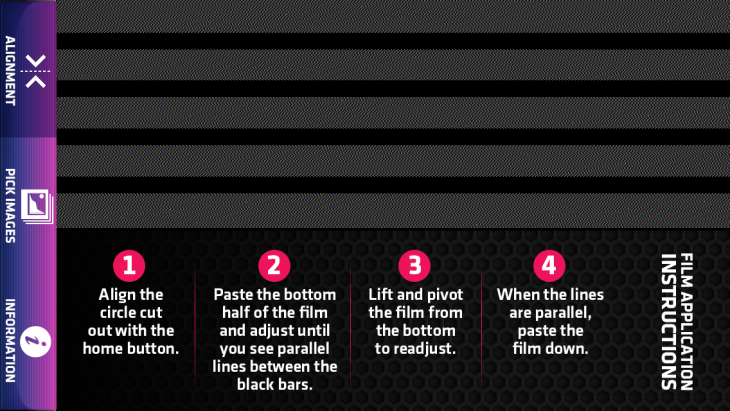 EyeFly3D advertises its product as “bubble-free,” but I still ended up with a couple of unsightly bubbles even after multiple attempts. It’s not much of an issue when the screen is on, but the bubbles stare back at me mockingly when the phone is off. That being said, I’m terrible at applying screen protectors, so you might have the patience and dexterity needed to get one on without any blemishes.

To view 3D content, you can use the EyeFly3D Vid and Img apps. You can turn 2D video and images from your camera roll into 3D, but I wouldn’t recommend it. The end result usually looked worse than the original.

Vid has a search function that lets you pull in 3D videos from the Web. You won’t find a ton of great stuff on there, but you can watch a couple movie trailers and a few demos.

You can also load 3D videos onto your iOS device using the File Sharing featuring in iTunes. In my experience, there isn’t much 3D digital content available legally, and you’d need a tremendous amount of space on your mobile device to load up a 3D movie anyway.

Future versions of the Img app will include the ability to create your own 3D images by designating which areas of a picture are the foreground, which are the middle

EyeFly3D claims that it doesn’t affect your normal 2D usage of the device. I’ve noticed a bit of jagging on text and icons when viewing my phone up close. Polarization isn’t significantly worse than some other screen protectors I’ve used, but it is noticeable.

3D video has improved in recent years, but it still hasn’t shaken its reputation for being a gimmick. EyeFly3D takes a step forward by removing the dorky glasses, but it lacks a fully-developed platform for streaming or downloading interesting 3D content. I’d consider paying $27 for an iPhone screen protector that also happens to do 3D, but I’d wait for content to catch up before paying $60 for the iPad version.