Exfm is shutting itself down … well sort of. The blog-powered music discovery service says that it is facing financial, technical, and legal challenges that prevent it from building out the service. The company revealed in an email and blog post to its users that its iOS and mobile apps will cease to operate on January 15, 2014, along with some of the functionality of its Chrome browser extension.

Launched four years ago, Exfm was originally known as Extension.FM. The service specialized in helping you discover new music and play it from within your Internet browser. It started off with a plugin for Google Chrome that scanned any website for MP3 files and could import them into a cloud-based library for playback. Since that time, the company has added mobile apps, a blog widget, and opened up its API.

However, it turns out that the cost the company paid to process the “millions of new songs every month” proved to be too high. In addition, it cited increased competition from popular music subscription services including Spotify, Pandora, Google Music, iTunes Radio, and others as a reason for its demise.

If you used Exfm, you can export your data using the company’s export tool and its brand new Chrome extension that will run independently of its backend. Besides the playback functionality, the new extension will continue to let users “scrobble songs” to Last.fm from Soundcloud, buy Bandcamp songs that are heard on Tumblr, and can still discover music on a blog and save it to Rdio or Spotify playlists. However, it won’t allow users to love songs nor follow people.

Exfm’s founders, Dan Kantor, Marshall Jones, and Jason Culler, state that this isn’t the end for them. But they are choosing this time to reassess their position in the music ecosystem to see if there’s a place for them.

Here’s the customer email in its entirety:

When we started Exfm four years ago, we had one goal. To help people discover and listen to new music on the web. What started as a Chrome extension quickly grew to a website, iPhone app, Android app, blog widget and API. Along the way we had people from over 200 countries use our apps and more than 50 artists play at our concerts in NYC.

Four years ago the music landscape was very different. Spotify and Rdio didn’t exist in America. There was no Google Music or iTunes Radio. Soundcloud and Bandcamp were just getting started. Today, music flows from all places on the web. It’s easy and affordable to get and it just keeps getting better.

After an amazing four years of sweat and tears, we’re ever-so-reluctantly accepting the reality of sustaining the Exfm platform as it exists today. The high costs of processing millions of new songs every month while attempting to keep that data relevant and useable is monumental. The technical challenges are compounded by the litigious nature of the music industry, which means every time we have any meaningful growth, it’s coupled with the immediate attention of the record labels in the form of takedowns and legal emails. Today, subscription services are gaining in popularity and enjoy the blessings of most major labels at a non trivial cost to those companies.

All this adds up to a very challenging position for a small startup with grand visions to make any real headway. The sad news is that we are no longer going to be able to keep the Exfm website and suite of apps up and running. To ease the transition to another music service, we’ve created an export tool so you won’t lose any of your songs, as well as a new Chrome extension that can run independently of our backend.

We still want to help create the links between the disparate music blogs and all of the music sites and apps out there. Our new Chrome extension will let you scrobble songs to Last.fm from Soundcloud. You can buy Bandcamp songs you hear on Tumblr. You can discover music on a blog and instantly save it to your Rdio or Spotify playlist. It acts as the glue between these services. 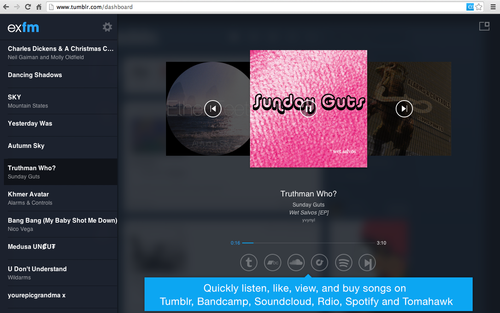 The new extension is available now. If you don’t have it yet, we hope you install it and give it a try. On January 15, 2014, we will completely remove the ability to love songs and follow people and your data will no longer be accessible. Our website will only offer the Chrome extension for install and our iPhone and Android apps will stop working. Our blog widget will also stop working. We urge you to grab your songs and sites before it’s too late.

Once you’ve exported your songs you can import them into an awesome new desktop app called Tomahawk which works really well with our new Chrome extension. You call also import all your songs to Rdio using this great website – re/spin.

This isn’t a full goodbye. We feel the time is right to reassess how we can continue to play a role in the new music landscape. We hope you continue to find us useful in the ever-growing world of music online. We’d love to hear back from you so please leave us comments and let us know your thoughts. Let us know what you think of the new Chrome extension.

Thanks for an amazing four years.