Evernote updated both its sketching and annotation app Skitch and the standard Evernote app for Android today, bringing a host of small, but notable changes that adds support for additional file types and improves the note-taking service’s home screen widget. 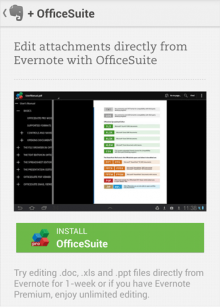 Evernote for Android now integrates with OfficeSuite, an app created by MobiSystems to help people create and share Microsoft Word, Excel and PowerPoint files on Google’s mobile operating system. Users can now view their original documents in Evernote and then instantly open them in OfficeSuite by tapping the edit button. Any and all changes will then be replicated automatically back in Evernote.

The Android app was updated in June with customizable reminders, but Evernote is taking that one step further today with a new, dedicated area located at the top of users’ note lists. It’s been designed to streamline the process of adding a quick deadline to individual documents, simply by reducing the text fields to just a title and due date. 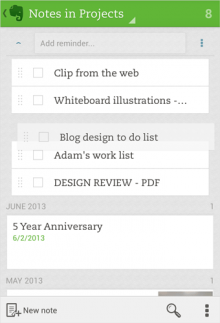 Widgets are an often underappreciated part of the Android platform, but Evernote has today updated its own home screen offering with several new features including list view and quick reminders. It’s hardly earth-shattering, but should keep users engaged in the service and on top of upcoming deadlines.

Skitch for Android, meanwhile, has been updated to give premium subscribers the ability to annotate PDF files. The feature hit the firm’s iOS and Mac apps back in April – so it’s been a little while coming – but includes a near identical feature set, enabling users to give feedback on scanned documents or exported PDF files.

The Android version of Skitch also comes with stamps this time around, which enables users to pick from a number of pre-determined icons and phrases, such as ‘perfect’ and ‘tell me more’, and then splash them all over their colleagues’ work for some quick critique.

The updated versions of both Evernote and Skitch for Android are available right now in the Google Play store.

Update: Skitch for Android is still being rolled out so it may take some time before you can see the update.