Apps to help you catch a taxi are starting to have a real effect in Europe, with reaction from some established players in the industry proving hostile to the concept.

Apps that have emerged in the past year or so often cut out an important part of the taxi market – the switchboards which have tended to be the people you got in touch with when you wanted a cab.

MyTaxi, for example, is one of the biggest players in the European market. Launched in 2010 and available in over twenty cities, largely in its native Germany but having already expanded to other countries like Austria, it provides a one-to-one connection between taxi drivers and those looking for a ride, and allowing users to rate individual drivers, saving them as favorites if they want to hire them again in the future.

MyTaxi isn’t alone; we recently covered Hailo, a similar service designed for London’s black-cab drivers and customers. Similar apps are popping up all over Europe, but it seems that in some markets, established taxi switchboards aren’t taking kindly to competition that cuts them out of the equation. 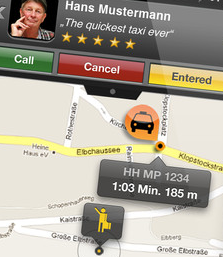 In Austria, at least one Vienna taxi driver has been sacked by a major switchboard service for using MyTaxi to get jobs (German link), leading to threats of legal action from both the driver and MyTaxi. One report (German link) even says that representatives of switchboards have ordered taxis from their drivers using MyTaxi simply to catch them out when they accepted the jobs.

While drivers may be under contract with a particular switchboard, there’s debate as to whether using an online service to get additional jobs is allowed or not. As Heise reports (German link), it appears to hinge on whether a smartphone app can be counted as a “radio service”.

The contract forbids the use of another radio service to pick up fares – understandable in the pre-app age where drivers would need to be tuned in to a radio to hear what trips were available. However, that wording may eventually lead to apps being deemed a completely legitimate second source of work for drivers contracted to a switchboard.

In Germany, things seem a little calmer as such switchboard contracts are deemed illegal. However, incumbent taxi operators in both countries are fighting fire with fire, launching their own dedicated apps. Vienna’s 40100 switchboard has launched an iPhone app, for example. By their nature, these are limited to specific cities or locales, whereas apps such as MyTaxi can be used in many places using just one app.

The situation recalls the way the established taxi market in San Francisco responded to the launch of Uber, which connects travellers with limousine drivers who have spare time between jobs. There too, taxi companies complained about this new rival but the debate centered on whether Uber itself (formerly called UberCab) was a taxi company in its own right, and thus should be licensed as one – something the startup denies.

Perhaps a more robust response comes from a report (German link) that the Taxi Association of Germany is planning its own app which will work across the whole of the country. Given that most taxi journeys are unlikely to cross national borders, that’s probably the best way the current big players in the taxi market can respond to the challenge of disruption from startups.

We’re still at the beginnings of the ‘appification’ of taxi travel, with startups which have been successful on their home turf looking to expand internationally.

Cities such as London are set to become battlegrounds for these companies over the next few months. Hailo is already present in the British capital, MyTaxi plans to launch a presence there in Q1 of 2012, and minicab price comparison and booking service Kabbee is planning an expansion into the black cab taxi market. There are sure to be others, too – and there will be blood.