iZettle is one of the European companies doing what Jack Dorsey’s Square is doing in the United States: trying to convince small businesses and individuals to take card payments with its mobile applications and a custom-built reader.

So far, the mobile payments company only has operations in the Nordics (the company is headquartered in Stockholm, Sweden) but today it is announcing that it is taking the first steps to launch in one of the biggest markets in Europe.

More specifically and as widely anticipated, iZettle has started inviting SMBs and individuals in the United Kingdom to join the beta testing program. 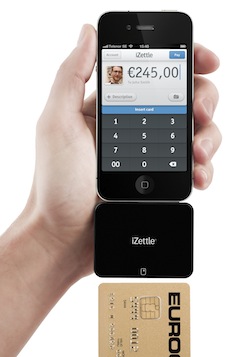 The company will ship 3,000 free chip-card readers (which is an important distinction with Square, which offers a mag-stripe reader) to carefully selected people and businesses.

I spoke with iZettle CEO Jacob de Geer on the phone earlier this week, and he told me the company will likely switch to full throttle in the UK in about 3 months.

iZettle says it has garnered over 50,000 users to date, and the company further asserts that it increased the number of point of sale card-acceptance terminals in the Nordics by 10 percent since it began operation in Sweden last September.

Small businesses and individuals in the UK will be chosen based on type of customer, location within the country, size and other factors, all in an effort to send readers to as diversified a sample of potential clients as possible.

Much like Square, the reader, combined with a mobile app, turns an iPhone or iPad into a credit card terminal. In the UK, iZettle will support MasterCard, American Express and Diners Club cards but not Visa.

Earlier this month, iZettle made news when it dropped its fixed €0.15 transaction fee to (almost) match Square’s pricing: users now pay only a 2.75% charge on sales for most major credit cards with the exception of American Express (2.95%).

There’s also mPowa in the UK, by the way.

On that note: I asked de Geer how he felt about EvoPay, the Samwer brothers-backed Square copycat that will likely roll out across Europe this year as well. He said there was definitely room for more than one mobile payments company in Europe, but that Rocket Internet (the business incubator started by the Samwer brothers) better expect to enter a very tough and complicated market.

“It’s a bit harder than cloning Amazon or Groupon”, he quipped. Oh, snap.