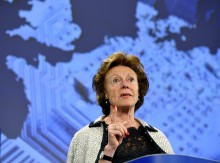 The European Commission has today adopted proposals for roaming-free mobile plans within Europe and EU-wide net neutrality as part of a larger package of reforms (called ‘Connected Continent) aimed at creating a single telecoms market.

Today’s decision is the result of a package drawn together and championed by Neelie Kroes, European Commissioner for the Digital Agenda.

Other new regulations include the abolition of premium charges for voice calls within the EU (under the new regulations they would be capped at €0.19 cents – plus VAT) and harmonized consumer rights written in more understandable language, which would allow for things like simpler contract switching.

Also on the table is co-ordinated 4G and WiFi spectrum assignment which would avoid device incompatibility issues. Incoming call charges within the EU should also now be banned come July 1 2014.