European Founders at Work is a new book which delves into the experiences of some of Europe’s most successful Internet entrepreneurs.

Taking a Q&A format, author Pedro Gairifo Santos learns the stories behind the likes of Tweetdeck’s Iain Dodsworth, Moo.com’s Richard Moross, Lastminute.com’s Brent Hoberman, LoveFilm’s Saul Klein, Xing’s Lars Hinrichs and many more – our own Boris even shares his history, with some interesting insights into the genesis of The Next Web and the companies that preceded it.

A native of Portugal, Santos himself had ten years’ experience in telecoms and finance before he took an MBA in the Netherlands and got involved as a Startup Weekend organiser. Now back in his home country, he is a director of Beta-i, an organisation that promotes entrepreneurship – he’s also building his own business.

We talked to Santos about European Founders at Work, in the same Q&A format he uses throughout the book. 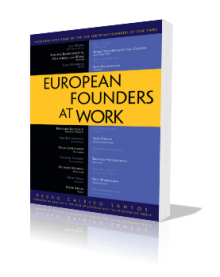 TNW: Where did the idea for the book come from?
PS: I’m a voracious reader and since (I was) very young I read books on entrepreneurship and startups. That led me to realize that most of them are written by American authors or with the American market as an example. That put a question in my head that is there for a long time now, which is how different is to start a fast growing company in an European country?

With my experience with Startup Weekend, I knew there are plenty of successful entrepreneurs in Europe, as I was inviting them to be jury members. Most people just don’t know about them. So one day the idea just materialized in my head to put all the pieces together and scratch my own itch. I actually never thought of myself to become an author, but it was just a combination of things that led me to feel that I needed to make this book happen.

The thing that stands out to me about European ventures (not entrepreneurs) is that they raise less money in more time than American ones, which leads to a greater focus on cash flow sooner. Most European ventures focus first on generating cash and then scale, while the model that you read the most is that if it has traction, just pump money into it to grow it into a global scale and then figure out how to monetize it. This works in the US, but not in Europe. I’m sure that in other regions there will be other differences as well.

TNW: Having spoken to so many entrepreneurs, were there any key similarities you noticed between them and the way they behave in their careers?
PS: Yes, I believe there are key similarities but at the same time, all of them are quite different between them. I would say the main common characteristic is vision.

Most, if not all, had a clear vision of what their product/company should be or why they are doing what they are doing. They looked at their current constraints but didn’t let them limit them. The other is perseverance. Some of the entrepreneurs I interviewed went through very hard times, sometimes for a long time, before they became successful.

An example is the story of Richard Jones of Last.fm, where he was sleeping on the roof of their office. Or of Illya Segalovich of Yandex, where it took almost 10 years for them to find the right product to the right market.
And of course, all of them had passion for what they built.

TNW: What lessons can other entrepreneurs learn from the book?
PS: It depends on how you read the book. If you read the book only as a set of interviews, you will get entertained and get some funny stories, but the way I think entrepreneurs will take the most value is by using these interviews as a reference on the decisions they made when building their businesses. No situation is exactly the same, but it helps to solve my own questions when building my company by comparing them with situations other founders encountered and what they did to solve them (or tried and failed).

An example I took for my own company recently was if we should grow by acquisition or not. And that led me to remember the interview with Brent Hoberman of Lastminute.com, where they grew by a very aggressive acquisition strategy. It helped me a lot to have a reference and know the good and the bad of it. I may take a different conclusion than they did at the time, but I will know both sides of the story.

TNW: Now the book’s out, what’s next for you?
PS: This year I’ll be going on several conferences to speak and promote the book. Also, and mainly, I’ve been working on building my own startup, All-desk. What we’re doing is changing the way people work, allowing professionals to find the best place for them to work, when they need it and where they need it, anywhere in the world.

We basically allow any office to rent out a place to work, generating extra money for them while allowing a global network of places for workers to choose from. Making this venture a success will be my focus on the foreseeable future.

European Founders at Work is published by APRESS and is available in paperback and for the Kindle at Amazon.