Google’s former CEO Eric Schmidt spoke at the Mobile World Congress today about the future of technology in developing countries and how its services will play a role in ecosystems who rely solely on the Internet for business, information, and communication.

During Schmidt’s keynote, he didn’t speak specifically about Google products and services but during the question and answer portion of his talk, he was asked directly about the future of Google search and advertising. He gladly answered the question and he noted that he had tried to not make his talk a commercial for the search giant.

Schmidt noted that Google search will continue to become more personalized, getting away from the “10 link” approach that we see in search results today. He noted that thousands of Google engineers are currently working on beefing up search with artificial intelligence in hopes to find us the results we want right away.

One important piece of the future is Google+ and its latest social functionality, which Schmidt interestingly didn’t mention once during his talk or the question and answer portion. 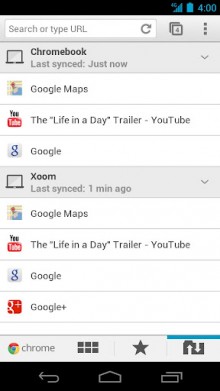 Instead of talking social, Schmidt focused on the power of mobile and again reiterated that Android is in a leading position when it comes to mobile operating systems. The keynote even started out with a demonstration of Google’s Chrome browser for Android, which was released in beta a few weeks ago. Schmidt also suggested that the company is heavily focused on getting Android’s latest OS version, Ice Cream Sandwich, on as many devices as possible.

When asked about privacy concerns, Schmidt stated that you could easily use Google products anonymously and the choice you make depends on the type of functionality you’d like to see as a result of your usage. Basically, if you search using Google anonymously, the company can’t learn about your tendencies and interests, thus making its results weaker and less relevant for you.

I was pretty surprised that Schmidt wasn’t pressed more during the Q&A on hot subjects such as privacy and patents, but he did mention that he’s no longer the CEO of the company and doesn’t get as much information as he once did. He did however get a dig in at Apple stating that Google doesn’t just go around suing people “like other companies do”.