This article was published on December 29, 2014

We still suffer from some form of gender bias in the workplace.

When given the choice for a female or male boss, 33 percent prefer a male whereas only 20 percent prefer a female, a new Gallup poll found. Although, the gender gap is closing as we look at preference trends through the years.

In the 50s, 66 percent of people preferred male bosses in contrast to a mere five percent who preferred female bosses. Twenty-five percent didn’t care if they worked for a man or woman back then, and now, that number has nearly doubled.

The growing indifference in management’s gender could be a reflection of society’s modern views. For years, women pushed for equal rights, then feminists aimed to take things further. We now have a history of respected women in power positions behind us.

The Rosie the Riveter “We Can Do It” mentality inspires independence in the mind of almost anyone with a bright idea.

A UCLA study found among business majors, male students are nearly four times more likely to focus on entrepreneurship than female students. But 19 percent of women still study business – not far behind the 27 percent of men who do.

The number of women entrepreneurs is skyrocketing, with a 68 percent increase since 1997. Some states, like Georgia, have seen a growth rate in women-owned businesses by more than 100 percent; others, like Texas and North, Carolina trail closely behind. Though gender bias still hangs on with 60 percent of investors who still prefer entrepreneurial ventures pitched by attractive men.

You’ve heard the mantra “know your audience,” and if you’ve studied basic social psychology, you know we like people who are like ourselves. Sometimes, the best way to market to your audience is to be a member of it yourself.

As your own audience member, you can easily tell what you expect or desire from your product. But what if, by nature, you can’t be a member of your own audience? What if your market and audience is dominated by a demographic you don’t fall into — such as male or female?

Here are some examples of successful entrepreneurs who crossed into industries dominated by the opposite gender:

Breaking through the boy’s slub

As a female, it’s not so easy starting a company in the male-centric tech industry. This was the case for Lori Fenstermaker, founder of Scavado, a search engine for recruiters with highly specific requirements.

“I think people would have an easier time accepting me if I had founded maybe a handbag company or if I was trying to change the world through Yoga or something,” she said.

Scavado began as a tool Fenstermaker developed for her own recruitment practices, but when one of her clients saw her secret to success, they asked to buy the license. 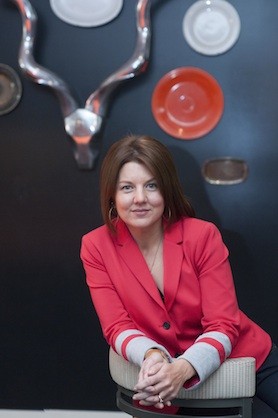 Four years after launching, Fenstermaker joined a women-only business accelerator in Denver called Think Global Institute, which provided her the advice and support she needed to move Scavado down the road.

Though, it hasn’t exactly been a smooth ride for the female developer-founder. Fenstermaker recounts one of her first moments as a women entrepreneur encountering gender bias.

“We received a coveted award in the HR Tech world,” Fenstermaker recalled. “Prior to accepting the award, I was standing with the 9 other recipients – all men.

“One of them asked me who I was accepting the award for. Some people have even assumed or insinuated that it was really my husband’s company and that I was a shell so we could get women minority status.”

As Scavado continues to grow, Fenstermaker admits, like many entrepreneurs, she learns a lot of her best strategies from mistakes. Several mentors have helped her navigate the road to business ownership – and not all of them have been women.

“Some of the men that have guided me through this road have given me some of the best advice I have heard regarding dealing with gender bias issues,” she said.

As for other women looking to break into the entrepreneurial world, Fenstermaker advises four important things: Go with your passion, follow your gut, make sure your business solves a real problem, and only take money if you need it and from those who truly believe in you.

The only man at the mommy expo

When 29-year-old tech entrepreneur Alex Furmansky entered into the family-friendly space with plushies, he had no idea what he was in for. His company, Budsies, turns artwork into custom plush toys.

The idea for Budsies evolved as Furmansky grew up along his younger sister. She would consistently bring home drawings from school, camp, and art classes. The drawings would hang on the refrigerator, then eventually graduate to a box in the basement.

“What if you could turn the wacky shapes and illustrations into friends that would last forever?” Furmansky thought as he watched his sister tuck her stuffed animals into bed one night. Thus, Budsies was born.

As a minority in a more traditionally female-dominated sphere, Furmansky notes there is a clear gender gap in the market.

“The pressure is more pronounced when we showcase our Budsies stuffed animals at mommy expos,” Furmansky said. “We are typically the only booth with a man behind the table.”

But he sees it as less of a challenge and more of an opportunity to stand out. Though he admits, having a gender-neutral name does cause confusion.

“People generally assume the founder of Budsies is a woman,” Furmansky explained.  “Customers and reporters write to us asking to speak to ‘her’ when asking for me.”

That doesn’t slow business by any means, though. The company’s key to success lies in a diverse team of employees and advisors.

“We want to include as many viewpoints from both genders as possible,” Furmansky said. “We each come with our preconceived prejudices, so having a diversity of inputs allows us to maximize both creativity and sensitivity.”

With the rise in entrepreneurs crossing into specific gender dominated markets, we might continue to see the gender gap become smaller until it dissipates from the workforce completely. Though we may never obliterate pre-conceived notions about gender roles entirely, we’ll at least see more people chasing their dreams regardless of a stereotype.

Read next: What I learned in my first year as a female startup CEO