This article was published on December 6, 2013

In an age where humans can go to the moon, procure prosthetic limbs and do all kinds of crazy smart stuff, you’d think we could devise a simple solution for ensuring we never lose our wallet, keys or smartphone. Right?

There is, of course, no shortage of gadgets designed to do just that. Take the Cobra Tag for instance, the Bluetooth-enabled fob that you can clip to anything and connects with your phone to tell you if either the phone or the fob-connected object move out of range of each other. There are other similar contraptions too.

But a new entrant to the field is seeking to differentiate itself  by being one of the first such offerings that uses Bluetooth Smart, in conjunction with recent software upgrades in iOS 7, to promise a truly reliable, consistent and versatile gadget-finder. We went hands-on with the Elgato Smart Key to see what it’s all about.

The box contains just the Smart Key fob and a keyring. The device has a pre-installed battery (CR2032) that should last around six months. A two-pack of these batteries only cost a dollar or so.

You can clip the ring to the fob if you plan to attach it to something – e.g. your keys or a bag – or you can simply slip the fob inside anything you wish not to lose. This could be a laptop bag, wallet or even the glove compartment of your car (more on that later).

The Elgato Smart Key is miniscule, and at 41mm x 41mm × 9mm, it can be squeezed inside the smallest of compartments. It also only weights 10g, so this is fairly innocuous.

Now, how does it work?

The Elgato Smart Key is basically useless without a compatible iOS device. It works with Bluetooth 4.0 (LE), so the iPhone 4S and up, iPod touch (5th generation), iPad mini, iPad Air and iPad (3rd generation or later). Did we mention it requires iOS 7?

Assuming your iDevice meets those basic specifications, you’ll need to install the accompanying iOS app, which serves as the command center for the Elgato fob.

With the app open, press and hold the Smart Key’s button until you hear a short beep, and the two should pair-up and connect automatically. You’ll then be asked to select the item you intend to connect the fob to – keys, handbag, camera, car, luggage and ‘custom’.

Each option comes with a default set of notifications – for example, ‘keys’ will show a confirmation message on your iPhone or iPad when they come within range of each other, and then when they disconnect you’ll be notified both on the Smart Key and through the app.

So the idea here is that if you accidentally leave your keys at home or drop them somewhere, your phone/tablet will notify you accordingly. Conversely, if you leave your phone behind but pick up your keys, then your fob will be kind enough to tell you so by slapping the back of your head. Not really, but it will beep and flash.

Through the app you can force the Smart Key to play a sound too, which is useful if you know your keys are somewhere in your living room.

If you choose ‘car’, then things are slightly different. Leave one in your automobile, and the app will show you where you parked it if you’re prone to forgetting such things. While the fob itself doesn’t have GPS, locations are determined by your iOS device – as long as that device and Smart Key are connected, locations are regularly stored by the app and show the Smart Key’s last known location before the connection was lost.

You can also customize the settings, including sounds and notifications on both the Smart Key and the iOS device. And you can give each a new name, upload a fresh picture and generally personalize things to your heart’s desire. So, on connection, you can have the fob flash a light, play a sound, or both. And you have a choice of jingles too. 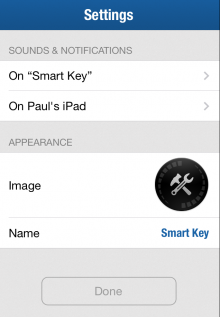 Of course, there will be many instances where you won’t want annoying buzzing and beeps just because you went outside to get something from the garage. You can turn the Smart Key off by visiting ‘Settings’ within the app, which shifts it into standby mode and also helps preserve battery.

However, you can also create what are called ‘Safe Zones’. Once you’ve enabled it, you can zoom in on a point on the map, give it a name and this will ensure your phone and fob are free to part without screaming ‘murder’.

There are many interesting use-cases for this, beyond that of finding lost keys or remembering where you parked your car. For example, you can put it in your suitcase, so that when it arrives on the conveyor belt in the airport, your iPhone will buzz to tell you it’s within range. You can just sit back, sup a coffee and let everyone else stand staring at that same orange monstrosity that keeps doing the rounds on the baggage carousel.

It’s worth noting here that only one device can connect with a Smart Key at any one time, which kind of makes sense I guess. But you can connect multiple Smart Keys to a single device, so you can slip one in your wallet, tether one to your keys and store one in your glove compartment. If you’re uber-paranoid about losing things, that is.

In terms of range, well, it really does depend. Bluetooth Smart devices can maintain a connection for up to 50 meters (160 ft), but obstacles and other interferences can affect this, so unless you’re in a wide-open space with nothing around, it would more likely be a lot less than this. Also, you can’t actually stipulate a maximum range, which is a shame – I think it would good if you could set things up so that if you drop your phone and move within 5 meters, you receive a notification.

The Elgato Smart Key works exactly as described, and is a great piece of kit. It could be improved though – for example, the audio on the fob isn’t particularly loud. You could easily miss it if you lose a tagged object in a noisy environment. Also, it’s a fairly generic design – which will be fine for most people, but it won’t win any prizes for its looks.

Moreover, you would be advised to continue using something like Find my iPhone, given that the fob can’t tell you where your iPhone is unless you’re in range, and then it’s based on audio cues only.

The Elgato Smart Key is iOS-only for now, but that could be because of the availability of Bluetooth Smart – Android 4.3 did technically roll out the welcome mat for Bluetooth LE, but it has yet to be properly embraced. This should change though, with more and more Android devices including Bluetooth Smart chips.

On the plus side, the Elgato fob doesn’t require constant charging, unlike some of the competing devices. The battery promises to last around six months, which means you shouldn’t have to worry about it frequently running out of juice. And the fact that it uses Bluetooth 4.0 ultimately helps too, given that it’s more energy efficient than the preceding Bluetooth standards, and is generally more reliable for this kind of use-case in terms of steering clear of false alarms. Bluetooth LE has a shorter range too, which is ideal for range-based scenarios such as this.

In terms of price, the Elgato Smart Key will set you back $39.95, €39.95 or £39.95 – it’s exactly the same price in dollars, euros and pounds sterling. This does seem a little awry, given that the currencies don’t exactly align with each other.

That all said, the Elgato Smart Key is money well-spent, and if you’re looking for an affordable and reliable means of tracking misplaced belongings, it will serve you well.