Austin, Texas-based tweetTV, which offers an eponymous real-time social TV guide service and is not to be confused with TWiT.tv, has raised $750,000 in seed funding from angel investor Joe Kalfa.

TweetTV was started in 2009 by Bradley Markham, who worked at Google in the early days, from 2002 to 2004, as one of the first account optimization specialists in the Adwords department.

Up until this point, tweetTV had been bootstrapped exclusively by Markham, and the service was initially released to the public in November 2011.

Basically, the service aims to group and amplify conversations about TV shows and whatnot that are happening on – duh – Twitter. From the pitch:

tweetTV’s unique social TV guide updates every minute to show real-time TV watching trends along with localized channel numbers for the user’s TV provider. Its real-time search feature enables users to find where the social buzz is among currently airing TV programs based on any combination of genres and networks.

The company will now use the fresh capital to build accompanying mobile apps, make enhancements to its proprietary algorithms and recruit employees.

tweetTV is advised by Joshua Baer (OtherInbox, Capital Factory). Other companies and apps in this space include miso, Tunerfish, Philo (Local Response), IntoNow (Yahoo), Flingo, GetGlue, Youtoo and Peel, among many others. 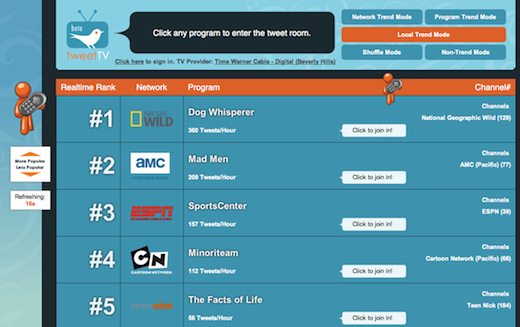