According to a study by Strangeloop, the creators of a site optimization tool, E-commerce websites keep getting heavier and heavier, with 8% more resource requests in 2011 than 2010. The study also finds that the average online retail site (out of the top 2k, according to data from Alexa) takes approximately 10 seconds to load.

Sure, 10 seconds isn’t that long, but my attention span isn’t what it used to be since my AOL dial-up days.

The cause for this isn’t always obvious (the culprit usually differs from site to site), but as our tools become more advanced, it’s not surprising to see some lag while searching for the balance between speed and functionality. Developers know that lean code and generally knowing what you’re doing is the best ways to speed things up, but sometimes the demand of features ends up taking a hit on the overall experience.

Strangeloop’s study also reveals some interesting data on browser speeds, particularly that IE9 was found to load E-commerce pages 29% faster than IE7, which is possibly due to general compatibility issues. IE9 and Firefox7 were also found to be 5% faster than Chrome, although it’s important to remember that this is not coming from a proper, full-on browser speed test.

Overall, the study shows that the future of an instantly browsable Web hasn’t quite arrived, even as Internet speeds slowly increase worldwide. If you’re impatient like me, leave a comment below. We should all get together and start a support group ;). 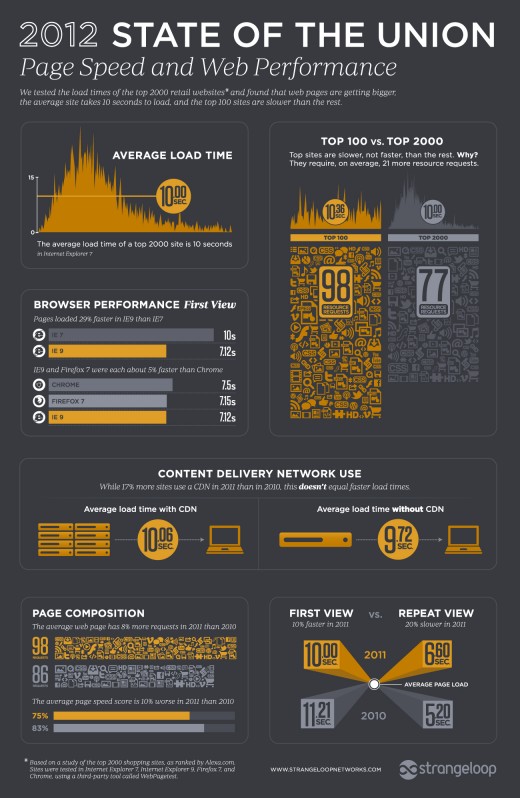