Drumo is an Australian startup that is aiming to make local search and content relevant and useful. The site provides local guides for eight cities across its native Australia and Asia which are populated by content from its own users, in the form of questions, answers and comments.

The Next Web caught up with Elliott Risby, who started the company ten months ago with co-founder Martin Konrad, to find out more.

Drumo (which is pronounced Droo-mo) first came about in response to Risby and Konrad’s frustrations with search, and the inefficiency of local results, in particular. It is a social network-like platform over which people can share local insight in seven of Asia’s biggest cities: Sydney, Melbourne, Tokyo, Osaka, Hong Kong, Singapore and Bangkok.

The service is best described as the Asia Pacific child that Quora and Foursquare are yet to have. Risby explains in more detail:

Drumo users can use the service to follow local neighbourhood places and topics to get answers from people around. The services helps you to learn exactly what is going on around you by providing real anwers from real people.

New visitors sign in to the service using their Facebook ID, in the same way as Spotify, where on arrival they are asked to select the city that they’d like to visit.

The service recently expanded its coverage and there are plans to take the number of supported cities up to as many as sixteen. The site is currently only available in English, but there are plans for provide local language support next year, according to Risby.

To help new users hit the ground running, Drumo analyses data from Facebook to provide a series of suggested neighbourhoods, places and topics to follow to help provide them with relevant content right away. Like Quora, users can keep up with information by following these categories along with other users.

Once you are inside the service, it is almost impossible to fail to notice that the question and answer layout has many similarities to Quora. There’s nothing wrong with that, and the categorisation of questions by topics keeps things clean and easy to browse. Like Quora, answers are ranked by users, who can give answers a thumbs-up or a thumbs-down based on their relevance, while comments can be left in response to answers too.

Drumo gamifies its service by awarding user with points and badges when they answer questions and contribute content both on the site, and on other social networks. An overall leaderboard shows who are the top users, while high scorers are honoured by becoming ‘local experts’ in their city.

As you’d expect, the site includes syndication with Facebook and Twitter, while there is an option to email content too. The latter is a particularly noteworthy addition as it allows users to pass information over to friends privately, outside of social networks.

The email-out option also gives Drumo room to reach those that rarely use Facebook or Twitter — perhaps out of fatigue — and it allows content to be shared with people that do not use either social network at all. Yes they do exist here and there.

The site does not yet have dedicated mobile apps, which is a deliberate move according to Risby, who explains why.

We have started developing an HTML5-based website which is allowing us to test and tweak the mobile user experience. We’re focusing on building the platform first, however, because it is the basis of the service. HTML5 can be built into an app very easily and, once it is completed, we will definitely be releasing apps for Android and the iPhone.

It is refreshing to see the team working patiently, as a rushed app could fail to replicated the site’s user experience on mobile, which would be a pity and potentially damaging. At the same time, mobile is a key component of any success service, particularly when location is concerned, and an app could increase total users and time spent on the site significantly.

Risby and Konrad dug into their experience as business owners to build Drumo’s proposition for companies. Both are both founders of a creative agency in Sydney, which gave access to plenty of company opinion, while Risby’s used lessons learnt from using web services to market the Yoga studio that he owns with his wife.

We ran some group deals at the studio but were frustrated with the lack of customer loyalty that we saw from Groupon promotions. We’ve designed Drumo to use knowledge from local communities and help to solve business problems along the way.

Companies can register ‘place pages’ on the service to give them an anchor from which they can tap into its possibilities.  Drumo users can keep up with businesses by following their place pages for the opportunity to received promotional deals and offers. In doing so, businesses gauge feedback and see what is being said about them.

However, that isn’t where it ends, and Drumo uses its gamification to provide an even stronger local presence for businesses, as Risby illustrates with an example:

When a user goes to a place page on Drumo, they will be able to unlock challenges. For example, if you visit your local cafe’s place page you will be able to unlock a challenge for a free coffee. The challenge can involve a range of different things, such as: answering questions on Drumo about that place, following the place and perhaps also sharing it with friends on Facebook.

Each challenge is different and merchants can customise the challenges depending on what they want to offer as a reward.

Once a user has completed the these very small online tasks, they unlock an offer from the business which they can then go and use at the merchant shop phyisically – for example, one free coffee from the coffee shop.

We’re really excited about this side of our business as it is in line with our game mechanics. We’ve been testing the model in Sydney and it has received a positive reaction, so will be looking to expand on it next year.

Furthermore, Risby and Konrad are planning to introduce location-based offers to the Drumo mobile apps, once they are released, as they seek to provide a compelling service that builds on, and encourages, customer loyalty.

The service has just opened its doors to the world after coming out of a closed beta with around 2,500 users. To date, Drumo has leveraged social networks and SEO to raise its visibility but Risby expects that, now out of beta, it will “rely on significant organic growth and company partnerships”. 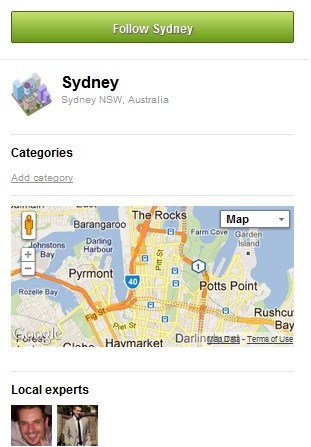 On that side of things, he reveals that the company is talking with “a major operator in Australia” as well as an unnamed potential partner in Japan. Risby also admits that they are now focused on looking into funding — he and Konrad have bootstrapped the firm so far — as they seek to scale Drumo to reach wider audiences.

The company is looking to go beyond its current reach to expand its user base, and the following cities in APAC will soon be added to the service: Adelaide, Brisbane, Perth, Shanghai, Taipei, Jakarta, Kuala Lumpur.

Drumo is planning to introduce its service in New York and San Francisco in time but conquering Asia is the first step, as Risby explains:

For now our focus is very much on Asia as we see a huge market opportunity here, but next year we are planning to launch in the US also. We purposely built the platform so it can easily be scaled, it’s actually quite simple for us to release new cities, however we want to test and modify Drumo before we release it in the US.

Drumo is an unique service that caters to a significant gap in the local search and information space. Though it already has a significant amount of content on its service, its mobile applications are likely to be key as it seeks to grow its reach in existing markets and into new cities across Asia.

It is certainly worth looking at if you plan to visit one of the cities it covers, and, if your city is already included, you should take a look for the chance to learn more about where you live in.