If you have kids, you’ll know all about those late-evening, midnight and middle-of-the-night cries for attention. Sometimes it’s hard to know what your little one wants – are they teething? Are they too hot/cold? Are they hungry? In reality, it could be any and ALL those things. Or something completely different.

This is all part and parcel of parenthood though – your job is to ensure that their calls for help are heeded. And a massive help on this front is, of course, a baby monitor. There are many dedicated monitors on the market – from all-singing-all-dancing (figuratively speaking) devices that play lullabies and project imagery onto the ceiling, to no-nonsense contraptions that simply let you listen-in from the other side of the house.

But with the smartphone and tablet revolution in full swing we’ve also seen a slew of apps hit the market, designed to unlock the technology already in your pocket. Some of these integrate with actual baby monitors, serving as a value-added tool rather than a replacement, while others require you to use your smartphones and tablets as the monitors.

Indeed, one of the latest to hit our radar is Dormi, an Android-only app (for now) that brings some real awesomeness to the baby-monitoring mix.

In its current form, you will of course require two Android devices to use Dormi – these could be smartphones or tablets.

But the idea isn’t so much that you go out and buy a couple of brand-spanking-new Samsung phones – it’s more about using your existing hardware, and perhaps even that old Android brick that’s been lying at the back of your drawer. With that in mind, Dormi is backwards compatible all the way to android 2.3.

Now, the easiest way to pair your two devices is to ensure they’re on the same WiFi network. Then load the app on each unit, and you should see the other device immediately. Click the device you wish to pair with, and that’s all you need to do.

If WiFi isn’t available, you can also tap 3G/4G – to do so you click ‘Internet Pairing’ instead, and hit ‘Generate Password’ on one device, followed by ‘Enter Password’ on the other one.

Simply type in the five-digit code and you’re good to go.

Next up, you’ll need to set one device as the ‘Child Device’ – i.e. the unit that will be positioned near your kid’s bed – and the other as ‘Parent Device’. It’s easy to switch this around at any point.

This is where Dormi really starts to shine though. The design, interaction and general look-and-feel is fantastic. To begin monitoring, you slide the little dot across to the ‘Play’ button on each device and everything just works from there. No teething problems, so to speak, and no complex setting-up process. However, this specific function serves a much bigger purpose – a purposeful swipe prevents users from accidentally switching the monitor on or off.

On the Parent device, there’s a push-to-talk button which lets you speak to your child if need be. A text-based notification also alerts you if a noise is made from the Child device, which could be handy if you’re in a noisy environment, or if your phone is on silent. Moreover, if the connection with the Child device is lost, the Parent device notifies you of this.

You can also view a full activity log of events that have happened in a timeline – so you can see when monitoring started and when any noises were detected. The more you dig into the app, the more you find neat features too – perhaps ones you may not even have considered as necessary before.

For example, you can add multiple (Parent) devices to a group – so you could have your Android tablet in the kitchen, and take your mobile phone outside if you need to get something from the garage. Additionally, this is useful if you want to monitor things while on the other side of the city, with your babysitter on-hand should direct immediate action be required.

In settings, you can change the device names to something more meaningful – e.g. ‘Little Billy’ – and opt to display the ambient temperature. But perhaps the icing on the cake here is the ‘Missed Calls & Text Messages’ option.

If you’re using Dormi as a temporary monitoring solution, e.g. if you’re staying over at a relative’s house and you didn’t bring your actual baby monitor with you, you may need to use your main Android phone as the Child device. 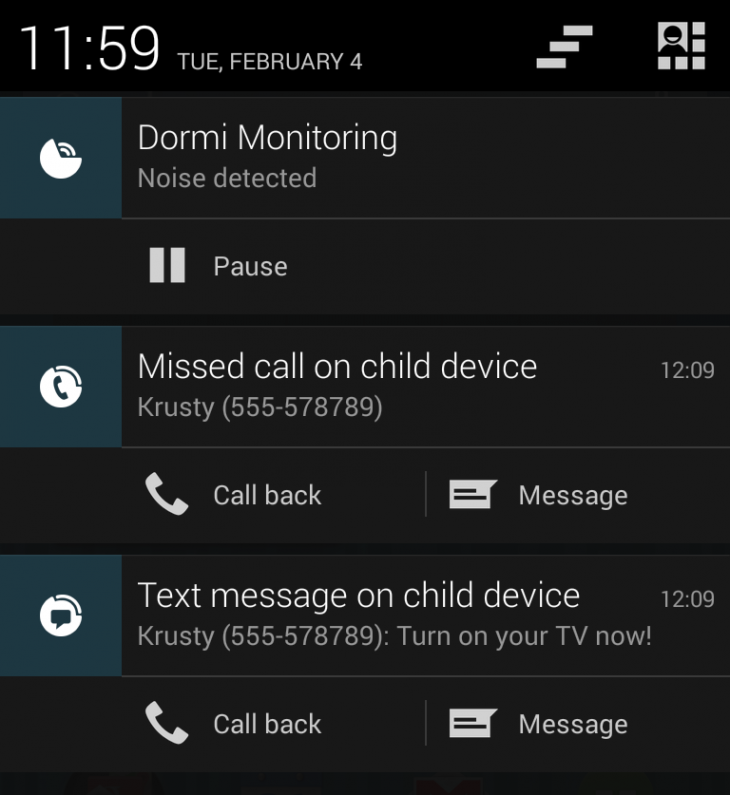 This, of course, means that you may be missing out on calls or text messages. But you can elect to view any missed calls and messages on the Parent device, and you can call back and respond without having to sneak into your baby’s bedroom to ‘borrow’ back your phone.

Indeed, it’s little nuggets like this that really make Dormi stand out. The attention to detail coupled with flawless execution and a lovely design should see this app go down a storm.

This is no match for a real baby monitor, right?

If you already have a dedicated baby monitor at home, you’re unlikely to switch to Dormi any time soon. But the way I see it, this is more designed for those situations where you are without a baby monitor – friends’ houses, holidays and so on.

It’s also worth highlighting one of the main potential issues with using mobile technology rather than dedicated baby monitors – the latter doesn’t require WiFi or a data connection. Initially I assumed that this could deter people from using this app, for example some remote holiday locations may not have WiFi or reliable 3G, but there is in fact a workaround here – you can create a portable WiFi hotspot on one of the devices, which can be used to connect the two devices together using 3G. Or if there’s no Internet connection at all anywhere, then WiFi Direct can be used to circumvent this (assuming both devices support this).

Also, the need for two Android devices may preclude many people from using Dormi, even as a temporary solution. But we’re told that a Web-based client is coming soon which will be a welcome addition – this will basically open it up to anyone who owns a computer and a single Android device. And while an iOS incarnation could be on the cards at some point, developer Sleekbit‘s co-founder Jan Simon says that they’ll wait to see how well the Android version is received before committing to a timeframe on this front.

There’s also scope here for video-streaming to be added to the monitoring mix – so not only could you listen to your little cherub, you can keep an eye on them too. Simon says this will likely be included in a future update.

While there are many, many baby monitor apps on Google Play already, Dormi has entered the fray with something really compelling. Though to gain full, unrestricted access it will cost you a little bit of money – but I think its pricing structure is about right.

Dormi is free to download and access its full features, but you will only receive four hours worth of monitoring a month. This won’t get your very far, but it’s enough of a ‘suck-it-and-see’ before you commit your hard-earned cash. To get unlimited use, you can either pay $1 a month, $5 a year, or $7 to unlock it forever. Even if you only use this a few times a month or year, it’s worth it.

Importantly, only one device on a session needs to have monitoring time available. So if you want to tune in with additional devices, it won’t cost anything extra.

Dormi is available to download from Google Play now.