Australian mobile developer Filter Squad has just released Discovr Movies, an application which allows iPhone, iPad and Mac users to discover more than half a million films from its database.

Discovr Movies allows users to peruse the collection of flicks and find new titles based on the films that they have liked through the application. If they’re looking for inspiration, they can also navigate through the app’s picks or learn more about the latest theatrical releases.

Discovr Movies is the third app that the Perth-based company has published this year, after Discovr Music in January and Discovr Apps and July. Both found critical acclaim and popular success; according to Filtr Squad, its apps recently cracked the 1.5 million downloads mark altogether, adding 500k downloads over the last two months.

This is quite impressive for a small team based in Perth, Australia. Although it takes 24 hours to fly from Perth to San Francisco via Sydney, Discovr’s apps reached their first million users in 9 months, faster than highly successful Silicon Valley startups such as Foursquare or Path (one year), the startup points out.

What all Discovr’s apps have in common is their focus on discovery, which the startup’s CEO David McKinney describes as “Discovery is a huge, daunting problem.” “There’s so much information in the world right now. How do you find the things you like? We started Discovr to help solve that,” he adds.

From what we have seen, there’s no reason for Discovr Movies not to be as successful as its Music and Apps counterparts. All share the same focus on design and UX, and Discovr Movies is an intuitive way to find films you may like. All you have to do to get started is to enter the title of a movie you enjoy.

The app will immediately return an interactive map of movies which you can expand as you wish. Double-tap/click on one of these, and it will take you to the movie’s page, which integrates trailers, information from external sources such as IMDb, Rovi and Rotten Tomatoes, as well as links to watch it on sites like Hulu, Netflix and iTunes.

You may also notice sharing buttons which let you share your activity with your friends via email, Facebook or Twitter – though the messages it sends in this first version are somewhat useless, since they point to the app rather than to the specific movie you were looking at. 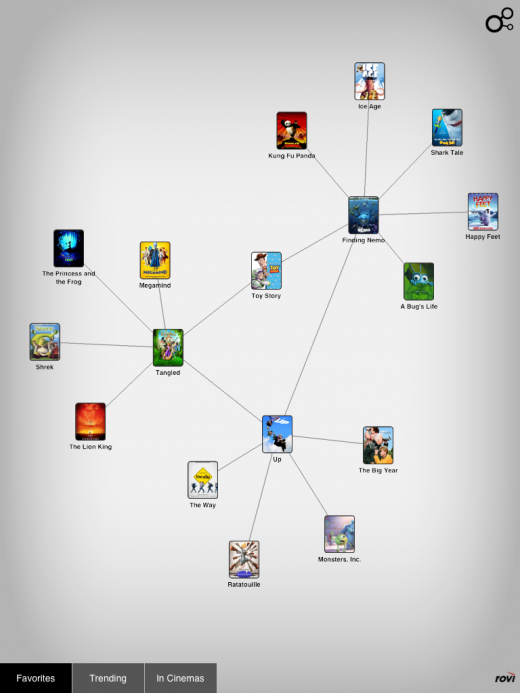 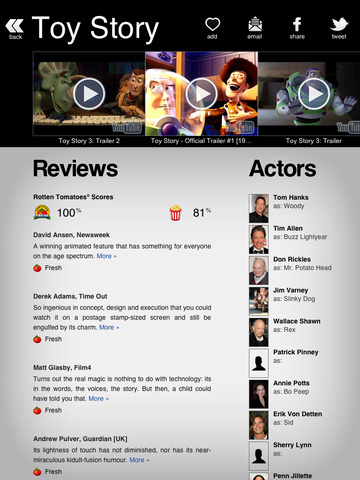 On the downside, these external links are probably the most frustrating part of the app, as film availability in iTunes varies depending on location and services like Hulu and Netflix aren’t available in all countries.

However, Discovr Movies itself does its “discovery” job quite well, offering relevant recommendations, and its iOS version only costs $99p during the holiday season. In other words, it’s worth the hassle of sometimes having to search for a movie elsewhere after selecting it – not to mention that the startup could also get other partners onboard in the future.

Beyond music, apps and movies

As a matter of fact, don’t be surprised to see Discovr close partnerships with brands – not only around its existing apps, but also to expand its concept to other forms of content:

Will Discovr’s platform expand to books and other items? Only time will tell, but it certainly sounds like a good idea.

➤ Discovr Movies, via the App Store (and soon via the Mac App Store)