Deezer, the second-largest streaming music service in terms of paid subscribers, has announced its US debut with the upcoming launch of a new high-resolution subscription. Dubbed Deezer Elite,  the premium offering works exclusively on Sonos systems and offers audio quality on par with CDs.

US customers will have access to the Deezer Elite beta starting September 15 through a partnership with Sonos and its professional installers. The service will then roll out globally at a later date.

At launch, Deezer Elite will offer a promotional price of $120 for the year or $14.99 a month, but the monthly fee will eventually rise to $19.99. Sonos owners will have access to a 30-day free trial.

The service streams music in the lossless FLAC format with a quality of 16-bit/44.1kHz. That equates to roughly a 1,411 kbps bitrate, a vast improvement over the existing 320 kbps streams from Rdio and Spotify. 90 percent of Deezer’s 35-million song catalog is eligible to stream at the higher Elite rate.

I’ve been testing Deezer Elite on a Sonos system (two Play:1s and a Sub) for the past few days and have been impressed with the results. The higher-quality stream sounds amazing, boasting better presence and clarity than other streaming services in many cases. If you’re in the US and have a decent Sonos setup, you should definitely give Deezer Elite a try for listening at home.

That said, there were some songs and genres, such as mainstream pop and rock music, where the extra bitrate wasn’t noticeable to an untrained ear. The truth is that 320 kbps is already good enough for most listeners, so whether the additional quality is worth a switch depends on your tastes and setup. 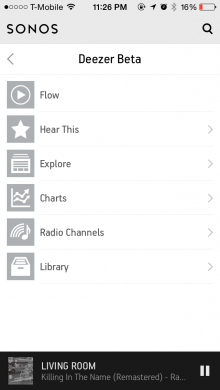 Deezer claims to have a larger catalog than Spotify, but it does have some gaps in its selection for US listeners. The service has taken a local approach to the countries it enters, so many of its songs come from international markets.

While Deezer’s US entry has expected for some time, the company’s initial strategy is to cater to audio enthusiasts before pursuing all potential listeners. True audiophiles presumably already have their own collections of pristine vinyl for listening to, but Deezer’s higher-quality should appeal to customers that care about audio resolution while enjoying the convenience of streaming music. Thus, Deezer felt comfortable with the exclusive launch for Sonos and professional home installations.

Any subscription music service must strike a balance between quality, convenience, price and selection. Deezer Elite offers an alternative compromise by pushing the pricing up in order to provide better sound quality at home. On mobile, you’ll get the same 320 kbps streams as other services.

Right now, Deezer Elite is price competitive with Spotify, but eventually it will cost roughly twice as much. Since I’m only using a loaner Sonos system, I won’t be subscribing long-term to Elite, but I’m curious to see whether audiophiles think Elite will be worth the extra money. I suspect they will.

In all likelihood, Deezer Elite will kick off an audio quality arms race that will result in competing services roll out their own premium options. That’s good news for our ears and potentially not so good for our wallets. It’s even worse for our bandwidth, though most decent broadband connections should be able to handle the FLAC files.

Deezer Elite takes another step away from the low-quality MP3 files that plagued the early Internet. The company’s US launch also takes streaming competition to the next level by finally bringing a global service to arguably the most important music market. It’s your move, Spotify and Rdio.