Over the past couple years, DataWind has been up-ending the emerging tablet market with its budget Aakash and Ubislate tablets, which sell for as low as $38. At CES last week, we spoke to DataWind CEO Suneet Singh Tuli about the company’s recent expansion to the US, UK, and Canada and its plan to “bridge the digital divide” for the next billion Internet users. 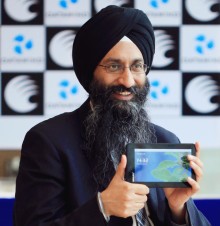 While DataWind is just starting to make noise in developed countries, the company has been around for several years. Tuli and his brother Raja Singh Tuli founded the company back in 2001 after working on two other tech companies in the imaging field. At the time, Tuli was interested in the difficulties associated with rise of the wireless Internet.

DataWind’s efforts caught the attention of the Indian government in 2011, winning the company a contract to produce low-cost tablets for students. Tuli estimates that there are 220 million Indian students that the company could reach with its low-cost access devices.

Since launching its tablet line commercially, DataWind has risen to become one of the top three tablet suppliers in India, alongside Apple and Samsung. In fact, it took the No. 1 spot a couple quarters last year, selling over a million units throughout 2013.

DataWind went on to expand beyond India with launches in Mexico, Nicaragua, Uruguay and other places. Widespread NGO interest in the US led DataWind to look into whether there was a market for low-cost tablets and wireless connectivity. After a few pilot programs and hackathons, DataWind decided there was a big enough price-conscious segment in the US to warrant bringing its tablets to the US.

Tuli said that demand for the devices has been strong in the US, attracting a “handful of thousands” of daily sales from its website.

“We’re realizing there’s a digital divide not only in the developing world,” he added.

When I first heard about a $38 tablet, I was beyond skeptical that it could actually be usable. However, Tuli explained several different methods that the company used to drive prices down. The key difference is that DataWind makes its own touch screens.

“When we saw the disparity in price and production cost, we felt we could squeeze that margin out. The LCD and touchscreen are the only products left with any real margin,” he said.

Other components like the CPU are cheap with just a 20 percent margin, but touchscreens sell with margins as high as 70-80 percent.

DataWind also designed its business model to generate money from services. Many customers in developing markets have opted for Ubislate’s one-year Internet packages because they don’t have ready access to WiFi connections. Ubislate has also tended to have a longer lifespan in countries like India, so the overall lifetime value of customers is higher.

“What we’ve discovered in India is that, even though the original customer might be changing, there’s a next tier of customer that they’re passing it down to,” Tuli said.

DataWind is open to driving the pricing down even further as it scales up. The company’s roadmap charts a path to sub-$20 tablet in less than two years.

“At this stage, we make a reasonable amount on the hardware and we’re okay with that, but it doesn’t mean that we can’t sell it at a loss in the future,” he added.

Initiatives like the One Laptop Per Child movement have pushed to connect developing nations with laptops, but DataWind found that the touchscreen on a tablet has a shorter learning curve.

“You don’t need to teach [new users]. The level of learning that they need to do to be useful is just minimal,” Tuli said. “I think that the skepticism about who’s going to teach them has been proven wrong.”

Tuli also noted that studies in developed countries about the educational improvements from using a tablet have missed the mark.

“Don’t look at that environment,” he said. “Look at the 1 billion in rural India that don’t have paved roads, where the teachers don’t show up.”

For example, DataWind is working with a home-based girls education NGO in Afghanistan. The students learn on the tablets, and parents have a user interface to track progress and assign tasks.

“Lots of cool stuff like that that are happening in different parts of the world. It will be impactful,” Tuli said.

While Tuli and his brother have set their sights on connecting new users to the Internet, they’re also running the company as a business. DataWind isn’t dependent on government subsidies and contracts.

“Our concept wasn’t thinking to sell it for charity. We’re trying to figure out what are sustainable business models,” he said. “The advantage we have is that we’re going after a customer nobody else is going after.”