Startup Weekend, an intense 54 hour event which focuses on building a web or mobile application, took place in Prague, the Czech Republic, for the first time last weekend. The weekend brought together people with different skillsets – primarily very young software developers, graphics designers and business people – to build applications and develop a commercial case around them.

After 28 pitches on Friday, voting narrowed them down to 11 projects which were presented on Sunday evening. Surprisingly, two of the top 3 projects were related to dogs, which might evoke an impression that Czech geeks are big dog lovers. And this might be true. As David Grudl, a matador of the Czech internet scene, recently noted at a conference for young internet entrepreneurs when being asked what he would have done differently 10 years ago: “I would have bought a dog much sooner. This would have saved a lot of time when I was chasing girls.” 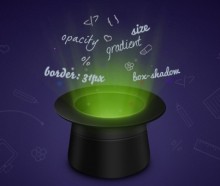 The youngest team at the event presented the project, CSS Hat translates Photoshop layer styles to CSS3 in a more elegant way than competitors, such as PSDdark, PSD2CSS or Layer Cake.

Originally, the 4-member team presented a “Wake or Pay” project – a special alarm clock which would motivate users get up early thanks to a threat of paying a 1 USD penalty if they continue sleeping. After a few beers on Friday, the team changed its mind – and the change paid off.

The motto of Lukas Ulrych who was presenting the project is “Stop doing shit you hate.” And users are ready to pay for that – he had asked 300 developers and 73 % of them are ready to pay. The guys plan to charge 12.99 USD in the App Store.

Sunset Hill – a virtual cemetery for pets – is about creating a memento of a beloved pet that lasts forever. The team (Vaclav Stoupa, Jan Kolar, David Siska) hopes to share the feelings of pet owners when their beloved pet passes away. They believe the desire is the strongest the first 3 months after death, when the pet owners are ready to pay for virtual gifts such as candles. Another 10 USD will be charged annually.

The project’s motto is “The night doesn’t need to be so dark, if you share your loss.” The authors target mainly single women aged 30+, and plan to use social media plugins to reach their goals. However, the idea isn’t new and there are many similar attempts from others in the past. You can watch a video of Sunset Hill here.

BarkBuddy – Do you have a dog? Do you own a smartphone? Would you prefer to meet and talk to people, who share interests with you, while walking the dog? If yes, bark and start using BarkBuddy.

According to Jan Zelezny, dogs deserve friends too. “Dogs are social beings and they like to play together. If their owners are smartphone users, dogs can easily find their buddies,” says Zelezny. BarkBuddy will be an HTML 5 application taking advantage of geolocation to find a place to walk the dog.

When you turn on the app, you’ll find all the dogs around and you can get in touch with them, discuss the location, dog food etc. The project owners guarantee USD 1 per new barkbuddy for life. Zelezny admits there are a couple of competitors on the market, such as Petpeoplemeet, but all are dating applications for dog owners. “We are here for the dogs,” says Zelezny. 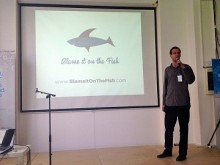 My favorite project was BlameItOnTheFish, which makes fun of the current startup hysteria and which also won the special audience and jury prize. “The project targets 3 billion people who do not like to make bad decisions and are looking for stupid excuses if they make a bad decision,” says Juraj Danko.

The idea is simple – a web camera will monitor a fish placed in an aquarium and, based on the fish’s movements, it gives  yes/no answer to users’ important questions such as “Should I date a handsome-but-dull or a bad-looking-but-rich guy?“; “Should I buy shoes or a dress?” – the fish will decide. And if the advice turns out to be bad, there is a fish to blame for your decision. Revenue will come from product placement on the aquarium, a ‘feed me’ button or partnerships with 15+ girls’ magazines, and ‘fish certified’ stickers. Juraj plans to introduce specialized fish (partnerships, finance-related advice, etc) in the future. “It’s not fun. Our project is a serious one. We have seen many more dull projects to be successful. There is no reason why we should fail,“ adds Juraj.

Sing Something is a project by the IOS developer Jan Ilavsky. The project lets your friends guess the name and singer of a song. The four-member team got inspired by success of Draw Something. “Good artists copy, great ones steal,” the authors said, introducing their project. A user choses one from three songs of a selected genre and period, and sings and records it as karaoke. Then she emails it to her friends. The project counts on viral effects of social media.

KiddieQ is an iPad game for pre-school kids. The game tries to estimate children’s school maturity. The interactive game makes the kids decide ‘what is right?’, ‘what is left?’, ‘what are the colors?’ etc. The main point is that kids are not aware they are being tested. The app generates a report at the end assessing the child’s maturity. The team seems to have the right expertise – one psychologist, a graphic designer and two programmers. They can succeed if they create a game interesting enough for kids with good data at the same time.