Cryptocurrency and blockchain are finally making waves in mainstream media – a trend that has sent thousands of recreational enthusiasts hastily flocking to talk crypto on various online discussion boards like BitcoinTalk, Steemit, Telegram and Twitter. But perhaps most popular among these is Reddit.

The self-proclaimed ‘front page of the internet’ has gradually established itself as one of the go-to places for heated discussions on cryptocurrency, blockchain, and the culture around these still-nascent technologies. Among other things, crypto-nerds frequent Reddit to share investment advice, drop trading tips, vent about silly decisions – and quite often, post dank memes.

But there is one particular Redditor who makes memes so dope, they are changing the very fabric of the cryptocurrency meme economy. Meet The Cryptos: the author behind the eponymous comic series that mocks your favorite cryptocurrencies by turning them into poorly-drawn comic characters.

Think of it as Polandball, but for crypto.

After months of entertaining the Reddit cryptocurrency community, The Cryptos recently launched its own subreddit where people can find the latest editions of the quirky web comic series. But before venturing into drawing comics, The Cryptos was merely another Redditor with a vague interest in crypto.

“I personally entered the cryptocurrency space in March 2017, after stumbling across ethereum on Reddit while bored and working as a waiter at a restaurant,” the anonymous author told TNW over email. “I launched [The Cryptos] on September 6 [last year].”

Anxiously browsing through CoinMarketCap, one day the author had a brief moment of contemplation. “There are more than 1,000 [cryptocurrencies],” the comic-maker thought, “[a]nd each one is unique.”

“As you look through them, it can be reminiscent of going through a Pokedex or staring at the back of a Mr. Men book,” he continued. ” You want to know about them all, but there are just so many.”

This is how the idea for The Cryptos was born.

Shortly after The Cryptos launched, one of the comic strips went viral on Reddit in December, attracting more than 115,000 views. “This made me realise the true potential of my project and it also kicked our dev team (me) into gear,” the author said.

A month later, The Cryptos now has its own subreddit and – in die-hard crypto-fashion – its own roadmap, outlining the future of the project.

Among other things, the roadmap (which appears to be semi-serious at best) envisions The Cryptos launching its first animated cartoon, getting listed on a “major” exchange desk, “forking off” into a YouTube channel, building a blockchain-based game, and eventually ceasing to exist in September later this year – perhaps due to increasing financial struggles, or so the roadmap suggests.

“Every milestone featured has been selected so that is it achievable in the time given,” The Cryptos tells me. “Some of the goals will be challenging and take a lot of effort, but I have complete faith in the Roadmap.”

“I am also of course also planning a few surprises along the way,” the author teased.

For now though, the mysterious force behind the web comic wants to focus on the short-term goals.

“I’m very lucky to be in a position right now to be able to devote a lot of time to this project,” the author said. “A side perk of creating my comic is I am continually learning about new and exciting cryptocurrencies – this in itself is a value proposition, as it gives me an extra incentive to conduct research.”

While The Cryptos prefers to refrain from spoiling what is to come in future comics, he was kind enough to offer us a hint. “At the moment, censorship is emerging as a huge issue across certain cryptocurrency subreddits,” he continued. “I absolutely want to address that, as I’ve personally been affected by it after having my comics deleted by moderators.”

“Other topics I plan to explore more include: privacy, rebrands, the power imbalance associated with pre-mines and also the impact of cryptocurrency on the environment.”

Meanwhile, here are some of my personal favorites from The Cryptos: 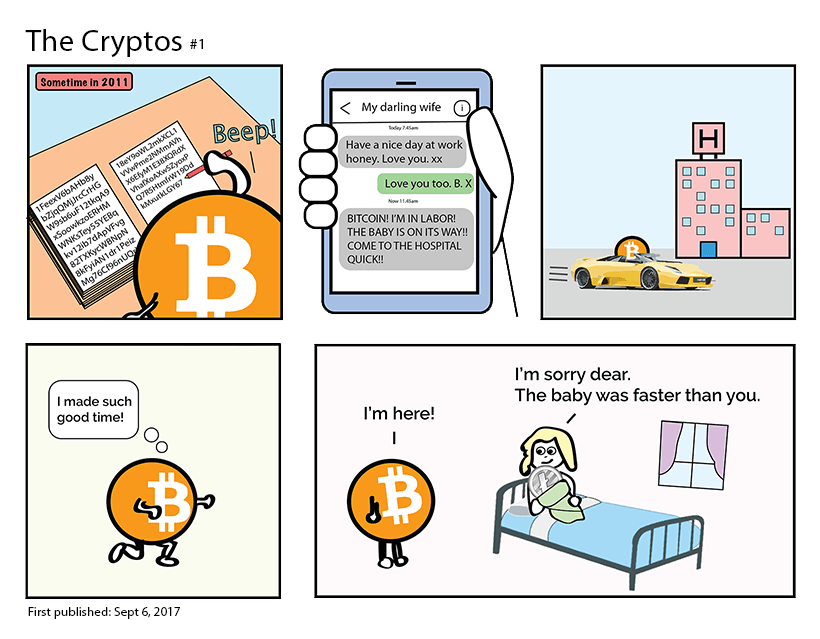 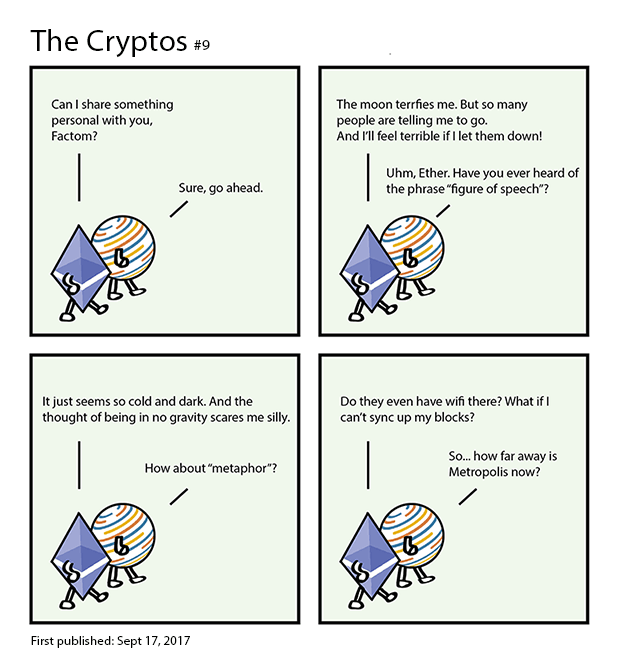 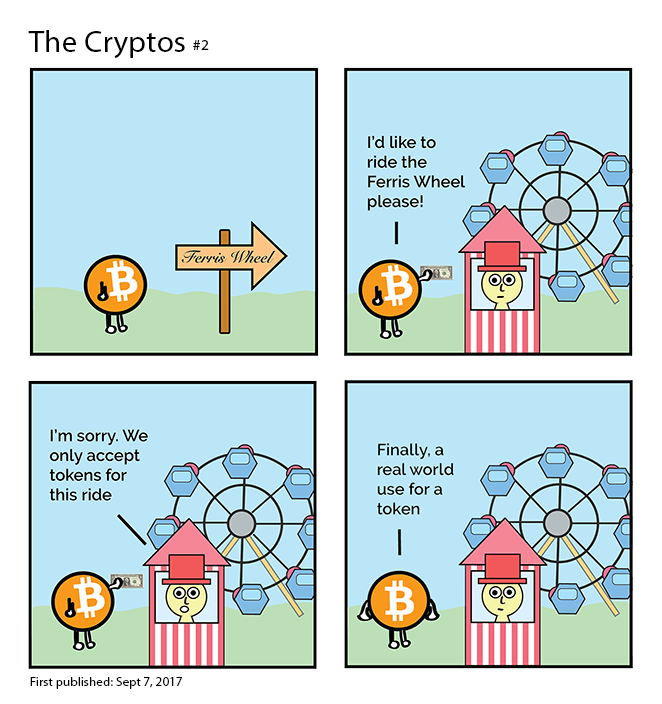 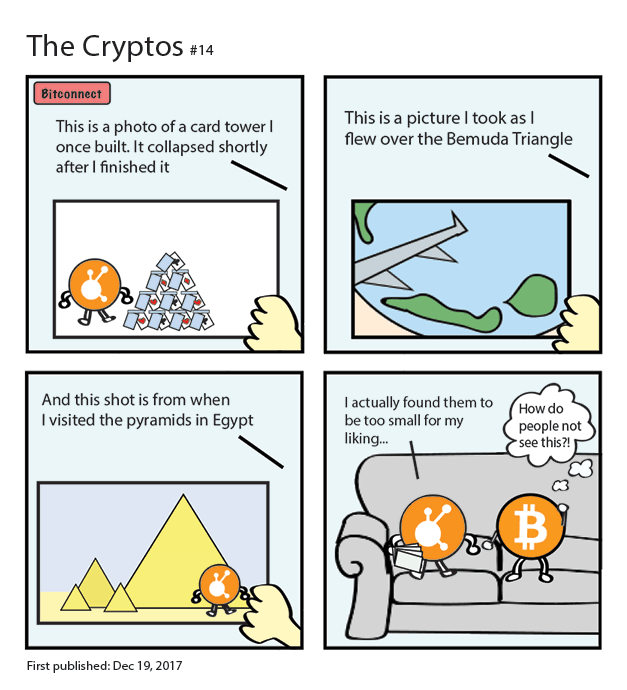 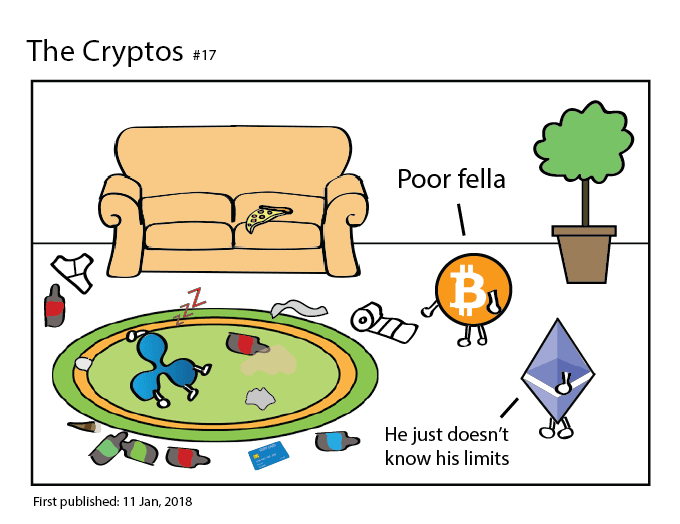