It’s a common narrative that cryptocurrencies will provide a platform for the millions of unbanked individuals in the world to obtain financial freedom.

In the developing world, around 50 percent of people over the age of 25 have a bank account. This is nearly half what is seen in the likes of North America.

If anywhere in the world needs access to more cost effective financial systems its those in developing nations, where the cost of sending money without a bank account can be prohibitively expensive.

According to World Bank figures compiled by Diar, sending money from Angola to Namibia, for example, can be subject to a 20 percent fee. It’s quite common for transfer fees to be over 15 percent. Where as in places like the US, Switzerland, and Germany, fees are well below 10 percent. 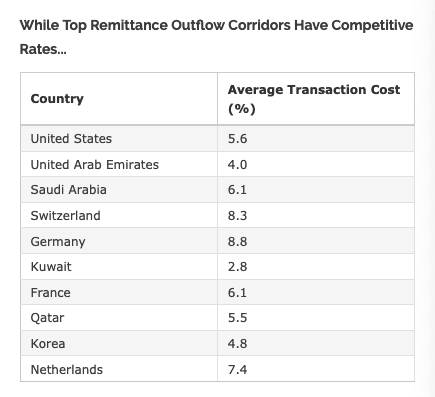 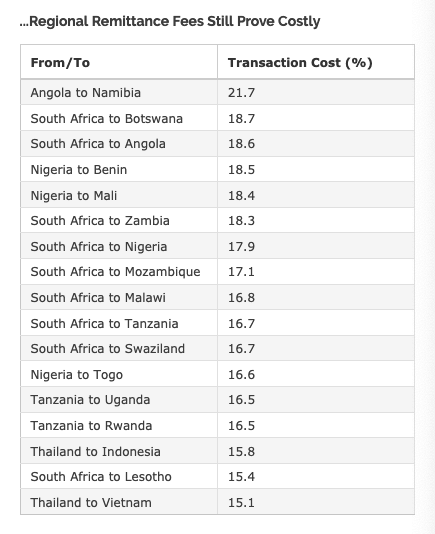 If you have to make regular payments to family abroad, this can add up quite quickly. Chances are if you’re using these kind of systems, like MoneyGram or Western Union, it’s because you have no other options. In many places in Africa, Money Transfer Operators (MTOs) have exclusivity clauses meaning there is no competition to help drive prices down.

Unfortunatley, most of the cryptocurrecy pushed into developing parts of the world (where people face financial exclusion), have been less than savory.

In countries like Venezuela, President Maduro has used his own imaginings of what cryptocurrency should be to push his agenda on a country that really doesn’t need it. And places like Argentina are being sold the dream through potentially costly and exploitative Bitcoin ATMs that seem never to materialised, despite repeat promises.

So what will it take to crack the developing world?

In a recent interview with Diar, Coinbase’s Vice President, Dan Romero explained how dealing with the developing world is a different kettle of fish to what we’re used to. It seems we can’t simply take the Bitcoin blueprints for the developed world and apply them. They will need some modification.

“Use cases in developed markets will be different to those in emerging markets as the US and Europe have a fairly well-developed financial system,” Dan Romero told Diar. “Our mission is to build out the ecosystem so that we can move away from the narrative of [cryptocurrency] only being a speculative investment. We need to move the technology into the Utility Phase.”

Indeed, taking cryptocurrency to a developing world when we still cannoy be sure of its long-term volatility, is not just potentially exploitative, it’s irresponsible. It’s all fun and games investing in cryptocurrency, until you lose your life’s savings.

Coinbase is branching out

Romero went on to tell Diar, “[w]hat you’ll see in 2019 and beyond is a big push to dramatically expand the number of countries offering an easy on-ramp into crypto. We are actively exploring countries in Latin America, Africa and South East Asia.”

In the case of the Petro, it was very much forced on Venezuelans, and most other places rely on Bitcoin ATMs to purchase cryptocurrency, which charge high fees, and don’t always give the best exchange rates. The on-ramps are, for the most part, exploitative when targeted at individuals who aren’t well versed in the world of cryptocurrency.

According to Romero, Coinbase makes a careful judgement when looking into new markets. The country’s regulatory stance, currency volatility, banking infrastructure, age, demographics, and smartphone use are all taken into consideration before pursuing the opportunity.

Going into a country with a wildly inflationary economy, unsupportive regulations, and questionable banking infrastructure is no doubt a warning sign the country might not be ready for digital currencies.

“Our first priority for us is to educate people about crypto[currency]. We’ll have to tailor our approach to address the specific questions and needs that are unique to each region that we operate in,” Romero further told Diar.

Taking those measures into consideration, along with an education-first strategy, makes Coinbase’s approach for entering developing markets seem logical, rational, and ethical.

Though, as a well-established company, entering these unknown markets poses a risk, which might go some way to explaining the exchange’s caution.

Whatever happens, 2019 looks to be the year cryptocurrency companies go their best to break into markets once deemed too risky.