What do you think developers need the most? According to the Brazilian entrepreneur Bob Wollheim, the answer is simple: “business capabilities.” It’s from this belief that his latest initiative was born. Appies, as it is called, is an accelerator of a new kind; instead of boosting startups, it focuses on app developers. So what is it about and why are apps a growing trend in Brazil?

From Hackathon to Appies

It was during a mini-Hackathon in Sao Paulo that the idea for Appies sparked in Bob’s mind. He and the angel investor Pierre Schürmann had already been talking about launching a new venture together for a few months. Indeed, the pair had partnered on an incubator called Ideia.com in 2000, and the recent boom of accelerators in Brazil got them thinking. They wanted to be part of it, but how?

While observing developers at the Hackathon he was co-organizing a few months ago, Bob had a eureka moment. He realized there was no lack of good ideas nor of development resources. By pairing them with business knowledge, it was possible to make a huge difference, Bob thought. He decided his next venture would be dedicated to adding these skills to app developers’. Five minutes later, Pierre was already on board, Bob remembers with a smile. 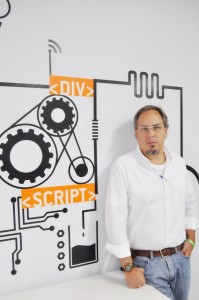 Appies’ selling line for developers? “Run the business while they’re busy developing great apps and APIs.” Indeed, not every one of them want to start their own business or knows how to, Appies’ introduction video points out. What Bob wants is to address this latent demand. Based on its experience and contact book, he’s confident that Appies can help developers improve their business skills and increase their income in exchange for a revenue share. Yet, it doesn’t call itself an accelerator, mainly because it works with individuals, rather than startups. However, developers may incorporate their ventures further down the line if necessary.

Appies will be initially based in Sao Paulo, where it will provide a co-working space for its developers. Different types of events will also take place in its offices, from small networking gatherings to training sessions. It will also host larger events such as Hackathons, Dev Days and an “Annual App/API Event.”

From a soft launch to global expansion?

Although Appies has officially launched already, its site informs that “it has only started operations in a soft mode. The full-time operations will only start on February 2nd 2012.” Bob acknowledges that Appies was conceived as a structure that won’t require much initial investment – both in terms of capital and of time.

Indeed, Bob is the CEO of the Brazilian digital media and event company SixPix. A busy job as you can imagine, albeit a bit less since a recent strategic partnership with the Brazilian media group Grupo RBS. For the time being, Bob plans to dedicate half of his time to SixPix and half to Appies – and the fact that both will be based in the same building will definitely help. As for Pierre, though he’s a quite hands-on investor, he won’t have any formal operational role at Appies.

Yet, it doesn’t mean that Appies has no ambitions – on the contrary. “As a digital platform, it has a global potential,” Bob thinks. He doesn’t rule out future conversations with investors, nor the possibility to launch operations in other locations. As for partnerships, Appies has already confirmed names such as Telefonica, the operator Vivo and the affiliate program Lomadee. Still, Bob makes it clear that Appies won’t focus on acquiring clients on behalf of the developers it partners with. It’s not a content producer, nor does it want to become one. However, Bob doesn’t seem worried about demand: in Brazil too, brands and corporations are increasingly awakening to what he likes to call “the Geek Economy.”

What more and more players are starting to notice is that mobile represents a tremendous opportunity in Brazil. Indeed, the market goes well beyond the smartphone-owning elite, as millions of Brazilians own more affordable feature phones, but nonetheless Internet-connected (see our previous story.) According to recent figures released by the national telecom agency Anatel, there are currently 224 million cell phones in Brazil, while the country ‘only’ counts 190 million inhabitants.

With that data in hand, it becomes obvious how much Appies’ focus on apps makes sense. So does its multi-platform approach and its plans to partner with several different online app stores, as iOS is only one system among others in the local market. In fact, Bob even has a feeling that Brazil may “take shortcuts” again and adopt HTML5 faster than other territories, just as it adopted mobile phones without having fully developed landlines yet.

Eduardo Lins Henrique couldn’t agree more. He’s the Head of Innovations at Movile, the Brazilian company we recently highlighted as one of the ‘Ten Latin American Startups You Should Watch Out For.’ Movile is the force behind Zeewe, an HTML5 app store which “has more than 1.5 million users worldwide,” according to the company. Today, it launched Zeewe 2.0, a new version of the store which is heavily using cache features for the site to load faster. According to Dario Sciacca, CEO of the Italian development house DS Effects, which has many apps on Zeewe, “the user experience is much better.”

Although Appies and Zeewe are not in business together yet, both Eduardo and Bob agree on HTML5’s huge potential, which is only starting to show. According to Eduardo, it’s particularly true in emerging markets – he’s convinced countries like Brazil will soon be flooded with inexpensive Android-based feature phones, as well as low-cost tablets (albeit in a lesser measure.)

Despite seeing market opportunities in Brazil, Zeewe’s vision, like Appies’, goes well beyond its home country. Indeed, the billing APIs it announced today alongside its new version will initially be available in the U.S. only, though Latin America and Europe will soon follow. If the U.S. is the first country where Zeewe will roll out carrier billing, using PayPal’s service Zong, it’s not a coincidence: 80% of Zeewe’s users are based in the U.S. and Europe, according to Eduardo.

In other words, Zeewe is a global venture as much as a Brazilian one – and Appies could very well follow its path in the near future. For now, Bob Wollheim already has an imminent international event in his schedule: the first San Francisco edition of the “online culture festival” he organizes, youPIX, which will take place on October 24th.

What about you, would you bet on the app market?