This article was published on December 8, 2012

IP or not IP? That is the question Shakespeare might be asking if he was still alive and cogitating his personal worth today; although perhaps not, since his intellectual property rights would have expired over 300 years ago. Not that he had any rights to begin with as the first copyright laws didn’t come into effect until almost a century after he was dead.

William Shakespeare was said to have lived life as a ‘poor player’ in London (aside from being a tax dodger and possibly a smuggler too). As a writer in the 1600s you were lucky if you got an advanced payment from a wealthy patron, otherwise your income was dictated by how many people you could get into the theatre. There were no ‘royalty payments’ for Shakespeare.

I wonder how eighteenth-century artists and distributors reacted in 1710 when Britain’s Statute of Anne first introduced the concept of government- and court regulated payments for creative work rather than it being a matter settled between private parties? No doubt a lot of people stamped their feet and stuck out their bottom lip in a huff – metaphorically of course as no adult would behave like that, surely? I’m willing to bet that a large proportion of the interested parties were near-apoplectic with the assertion that the introduction of copyright law would be the death of the creative arts! Especially those who stood to lose profit.

Despite their objections, copyright law was introduced and has served us well for over 300 years, though around 30 years ago we started to see the birth of a new and radically different movement compared with the money-grabbing corporations of the 1980s; the open-source movement.

Copyright in the Internet age

The digitisation of life; the connectivity of the world; pretty much every major life-enhancing aspect of the Internet that we’ve come to hold dear as ‘human rights’, have slowly but surely been chipping away at our ‘intellectual rights’. Trying to stop people sharing digital content in this world is like trying to hold back a river with your bare hands. Yes it’s painful watching everything you’ve worked for washed away in a torrent (pun fully intended); but you can’t stop progress so you might as well start swimming with the tide or get washed away yourself.

Today, around eight out of ten UK homes have access to the Internet. We all have the opportunity to download and consume pirated material, wittingly or otherwise. A lot of us exercise that opportunity with varying degrees of risk and reward. But with several high-profile prosecutions recently involving popular online piracy resources and so many people with their fingers in the pie, copyright has become a ubiquitous topic of discussion in the 21st Century.

There is a growing lobby calling for complete overhaul of intellectual property laws, claiming it’s a model that just doesn’t fit in a connected world and enforcing it only stifles creativity and innovation. We are even starting to see national politicians voted into power on the strength of copyright reform policies.

A Swedish representative from the Pirate Party, Amelia Andersdottir , was at the Internet Governance Forum (IGF) last month and I thought she did a pretty good job in the opening speeches until she threw in a gratuitous ‘fuck you’ dressed up as a George Michael quote to shock the soberly suited crowd .

Aside from the freedom of expression discussions I mentioned in my last report from Baku, copyright was another popular topic at the event. That wasn’t much of a surprise though as it has been high on the IGF agenda every year. So, after seven years of talking about it are the workshops getting closer to uncovering a unified solution?

The roar of the dinosaurs 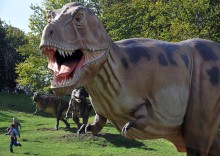 The consistency with which traditional copyright supporters turn up to these discussions to defend their aging livelihoods is becoming tedious in the extreme. Don’t get me wrong, I can understand how the record labels, publishers, film studios, agents, promoters and funders feel like they are under attack. It’s because they are. So they batten down the hatches with worn but sturdy arguments in support of strengthening copyright laws rather than relaxing them as proponents of change would have.

They propose using brute legal-force to make us fall into line rather than looking for ways to work with the opportunities and reach a wider, potentially more lucrative audience. The uncompromising position of both sides makes it very hard to see any progress in these discussions as the opposing stances only serve to polarise a room.

I saw this happen first hand in a session I chaired at the IGF. The workshop was titled “How do we ensure the future of creative content online?” We had named the session carefully because we didn’t want to get bogged down in discussions that we’ve had too many times before. A panel of forward-thinkers were assembled to try to look past the roadblock of an undecided future for traditional copyright and catch a glimpse of what alternate realities might be. The session started encouragingly enough with the panelists casting their minds forward ten years to try to picture (in a fictitious, dystopian future for copyright) how the marketplace might look.

Bill Echikson of Google was naturally behind the advertising micro-payment model where creators get a share of the ad revenue, their income ultimately driven by how many people consume their work. But the trouble with this model is it’s very easy for search algorithms to be manipulated for personal or financial gain.

Indeed the US Federal Trade Commission has been investigating Google’s own activity in this respect recently. There is also a question of serendipity; if the main content discovery platforms like Google are using popular search terms and common connections to decide what we are looking for, are we not in danger of killing creativity in a different way? It could certainly herald the death of the kind of creativity that challenges us and takes us by surprise. So should search algorithms therefore be weighted in favour of less-commonly sought content, so that you can ‘stumble upon it by chance’ in the way you used to find stuff flipping through the channels on the TV remote?

But wouldn’t weighting the algorithms be exactly what Google is being investigated for at the moment?

Dr Ian Brown from the Oxford Internet Institute floated the optimistic notion of a celestial jukebox connecting the world, where we can download whatever we want, whenever we want it and the creators will be remunerated fairly for their work. You could practically see heckles in the audience rising at this; those suited and booted men and women that this model would effectively see replaced with a software interface.

For another panelist, Cedric Wachholz of UNESCO, it was an entirely different discussion. While the others were concerned with how to get their pound of flesh out of current creativity, UNESCO is going through a revolution of its own; liberating precious and rare historic works by making digital copies available to the public, which in turn opens up a whole new market. As time marches on making digital copies of the art created by the human race is the only realistic way of preserving our cultural history, but who should be custodian of that vast library? And how are we going to pay for it?

Of course the moment I opened the debate to the floor it was hijacked by the pro-copyright lobby, unable to see past their own indignation at having their comfortable livelihoods threatened. But we had at least managed to table some halfway decent ideas before they took over I think.

For me, the most cogent idea came from my twittersphere in the week leading up to the event. On their behalf I proposed that sites like Kickstarter and Indigogo could form the groundwork of a new intellectual rights model, and in some ways that idea brings us full circle back to Shakespeare’s time. Using crowd-funding, artists could seek a cash advance for their time and trouble in creating a work of art – a lump sum they are satisfied with for the level of work they put in, akin to the wealthy patron’s purse of olden days. Only this wealthy patron is a collective of supporters from the Internet.

If demand is there you’ll know you will be fairly remunerated for your work. And if it becomes a runaway success you’ll get paid more than you expected and can seek a share of whatever revenue streams remain once the work has been distributed. And if that just means the elevated status of having your creativity shared, discussed and loved by millions around the world, it shouldn’t be too hard to turn that notoriety into profit when the time comes to fund your next project.