The player, if you’re unfamiliar, presents you with a gorgeous interactive viewport that allows you to watch video the same way you would if you were looking in on the scene.

Play the video and move your phone or tablet around, as if you were there, watching the action in person. It’s a fresh take on video that seems nearly perfect for concerts, extreme sports and racing. The effect is both incredibly impressive and hard to describe without having you try it. You can see how the app works by downloading the new version here now.

As a part of Techstars NYC’s third class, Condition One raised $500k in a seed round, which was then grown with $2.35M in funding from Mark Cuban, Manilla CEO George Kliavkof and a variety of other angels. It also penned a deal with Mercedes, Discovery, The Guardian and Pop Sci as a part of its pilot launch.

Condition One was co-founded by war photographer Danfung Dennis and product head Takaaki Okada, the designer of the OLPC laptop’s interface. Dennis has been covering wars in Iraq and Afghanistan since 2006 but gained notoriety in 2012 with his Academy Award nominated film Hell and Back Again. It was a beautiful and powerful film that came from Dennis’ time embedded with the US Marines Echo Company in Afghanistan.

The technical aspects of the film were no less impressive, with a custom rig that included the Canon 5D Mark II, it served to push the digital SLR filmmaking arena into the consciousness of many. That same camera would go on to serve as the primary on an episode of House and provide a whole new set of journalists and filmmakers access to more powerful — and more affordable — tools than ever before.

I spoke with Dennis at this year’s CES conference and he says that when he started shooting with the Mark II, he kept running up against its limitations, using hacked Magic Lantern firmware to tweak audio levels and more on the brand-new device. “I remember updating the Canon firmware that finally added manual controls in the tiny Kurangol valley, praying that it wouldn’t turn it into this useless brick,” he recalls. 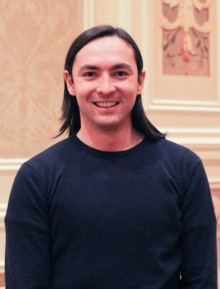 But the experience, shooting with a custom rig and pushing the Mark II to its limits, also made him very aware that what he was seeing wasn’t what the viewers of Hell and Back Again were going to see. The experience of being there, in the midst of combat, and later at home with Sgt. Nathan Harris, as he adjusted to life at home, was severely limited by the static frame that he had to work with.

Out of this came the desire to make something more immersive. “People were only glimpsing what I saw, I wanted to make it feel like they were there,” he says.

In 2010, Dennis met Okada, and Condition One was born as a way to create a more immersive experience for all video. They released a proof of concept last year, got some notice from brands and spent the last year removing one more barrier from the immersion experience: resolution.

The process for creating the Condition One video player began with the vintage Cinerama process, which projects multiple 35mm frames onto a dome, synchronized together to provide an ultra-wide field of view. “You placed the viewer at the center,” says Dennis, “and they could look all around them, immersed in what they were seeing.”

The new Condition One app performs a similar trick. From video as high-res as a 4K Red camera, they process the image and split it into four 720p segments (for a maximum total of over 5k pixels in width) that are then perspective corrected and ‘projected’ in real-time using an iPad or iPhone. The demo was stutter-free and provided a super-crisp viewport that I kept unconsciously moving forward towards my face, wanting to lean into it. 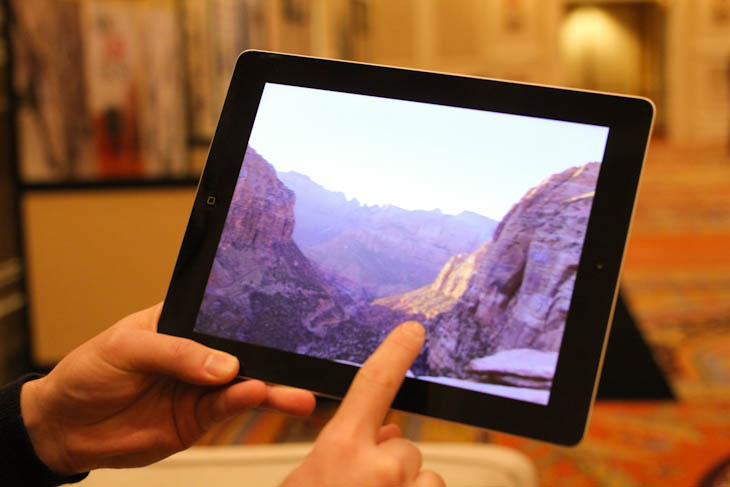 Footage of drives down desert roads, racing around tracks, floating down rivers and more are available as demo reels in the app. They’re incredibly impressive. You simply move the device around as if it was your head, looking left to right, top to bottom. Touch inputs are also available if you tire of that.

The video for high-resolution cameras is processed by Condition One, at a rate of around 5 minutes to one minute of footage. But that process doesn’t require anything special in post processing for potential clients of the web or mobile players. Condition One’s shooting process begins with footage shot through the Canon 8-15mm fisheye, but an equivalent lens will do. There is also a basic ‘style guide’ that they recommend. Dennis says that there is a certain ‘syntax and grammar’ to shooting footage this wide.

But he stresses that there isn’t anything special going on as far as the video goes. Production houses that want to use the tech to broadcast concert footage, sporting events or what have you can use the same production process that they always have.

That’s very important when it comes to the live streaming tech, which allows companies to process the video into the same immersive player that you get in the app. Which is pretty insane when you think about how much is going on there. Live streaming a fully interactive, accelerometer or touch-enabled video is like the holy grail of concert experiences, as far as I’m concerned. Plant a broadcast rig in the crowd and it’s like you’re there.

The on-device processing doesn’t end there, though. They’re also planning on opening up the viewer to users of the GoPro cameras, a market that they see as primed for this kind of player. GoPro cameras shooting up to 1080P can process right on the device by dragging and dropping using iTunes and users with 4K GoPro 3’s can process their video through Condition One.

The result is the same. Rad interactive video right on your iPhone or iPad, sharing the experience of what it was like to be there, on the bike, in the car, in the tube. Exactly what the GoPro brand is all about. The thousands of GoPro users out there are going to eat this up, though they’ll have to wait for a bit. It’s going B2B first, with the consumer product following shortly thereafter.

I asked Dennis what the endgame is for Condition One. He says that the goal is to “create demand” for this kind of video. To do that, Condition One is in the process of locking in deals for companies to license its API to present both live and recorded video in its trademark style.

Once the video is out there, Dennis says, people will see it and want it. And I tend to agree.

Note: Condition One provided me a water while I was meeting with them, but I don’t think it affected my reporting. I was pretty thirsty though, so you never know.