Connected devices account for 2.6% of web traffic across ten Latin American countries, comScore informed today as part of its ‘Device Essentials‘ study series, which it launched in the region in July.

It’s worth noting these numbers have to been taken with a pinch of salt: comScore defines traffic as browser-based Internet page views. This means it doesn’t include apps, which seems to have contributed to lower the mobile devices in its study, compared to its share of total Internet traffic.

It’s also worth mentioning that mobile, 3G access via a computer isn’t included in “mobile” as defined here, since the study is device-based, not access-based.

Yet, according to comScore, its numbers reflect the increasing importance of mobile devices in the region. As its VP for Latin America Alejandro Fosk notes, “a growing number of Latin Americans stay connected though smartphones and tablets.”

This is true in the ten countries comScore took into account, albeit with local variations; non-computer traffic varies between 5.9% in Puerto Rico and 1.3% in Brazil. Although 1% is still fairly low, it represents an increase compared to the numbers comScore released in October. At the time, non-computer devices only accounted for 1% of traffic, a number that was already 60% higher than in May. 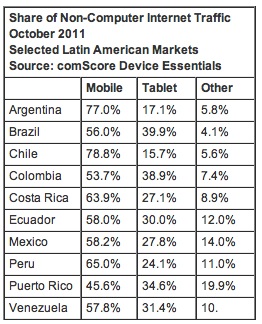 Tablet use also varies quite widely depending on the country comScore is looking at. While tablets are responsible for almost 40% of this ‘non-computer’ traffic in Brazil and Colombia, their share is only of 17.1%and 15.8%  in Argentina and Chile, where mobile phones are still responsible for 77% and 78.8% of traffic.

This relative weight of tablets vs. mobile phones is higher in Brazil than it is in the US or the UK, comScore previously noted.

This is an interesting trend, which the Brazilian government efforts to lower tablet prices made in the country could fuel even further (see our story about Foxconn in Brazil).

This study also contains interesting numbers on each OS’ market share. While times have been tough for Blackberries in most countries around the world, RIM may find some solace in Colombia and Venezuela, where it respectively holds 10.8% and 14.2% of the market.

Overall, the local market seems quite diverse when it comes to platforms, starting with the non-negligible portion of “other” devices, which are not running on iOS, Android, Symbian or RIM platforms.

Still, iOS is clearly the leader in most of these countries – except in Argentina, where Android wins by an inch (33.1% vs. 27.5% for Android):

What this study mostly confirms is the growing importance of mobile devices across the region, although anyone interested in this market should take a closer look at these numbers and pay attention to the specific situation of each country.