Online data measurement company comScore has released its latest digital media insights on the US tablet market, finding that tablets have hit a key milestone in the US mobile market.

The report found that 1 in 4 smartphone owners also used tablets during the three-month period ending in April this year, but it’s perhaps not too surprising to discover that tablet users are almost three times more likely to watch video on their device than smartphone users, with 1 in every 10 tablet users viewing video content almost daily.

“Tablets are one of the most rapidly adopted consumer technologies in history and are poised to fundamentally disrupt the way people engage with the digital world both on-the-go and perhaps most notably, in the home,” says Mark Donovan, comScore SVP of Mobile. “It’s not surprising to see that once consumers get their hands on their first tablet, they are using them for any number of media habits including TV viewing.” 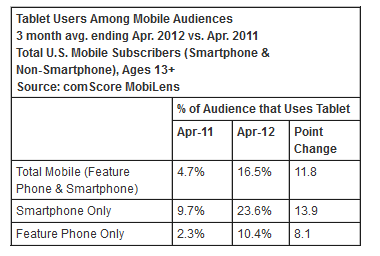 Tablet take-up has exploded in the past two years since Apple’s all-conquering iPad hit the scene, and as of April this year, ComScore says that 16.5% of mobile phone users also used a tablet, representing an increase of 11.8% in the past year.

Extend that metric to include smartphone users only, and you’ll see that this rises to 23.6% who also own a tablet, up 13.9% from last year. Clearly, the computer-like performance of iPhones, Samsung Galaxy S2s and the likes are driving folk to be better connected through multiple devices.

The report also delves into the demographics behind tablet and smartphone owners, revealing near-parity between genders. Though when considering ages, 25-44-year-olds had the highest concentration of users in both mobile device categories.

A final point worth noting – the study shows that more than half of tablet users watched video and/or TV on their device in April 2012. By 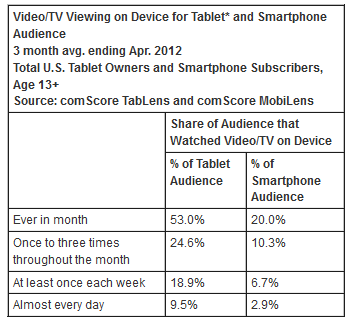 comparison, only 20% watched moving images on their smartphone.

Of those tablet users who watched video at least once during April, more than a quarter (26.7%) paid to watch content, which will make interesting reading for content producers, as tablets emerge as seriously lucrative platforms.

You can see more details from the report here.