If you’re as deeply tied into tech as we are, you likely hate that feeling when you realize your going to be stuck on a plane for hours with little to entertain you but a tiny TV screen, some crappy headphones, and that book that you take on trips but never read.

While at first it might seem like a nice idea – jetting through the air undisturbed by phone calls and emails from your boss – it can soon become tiresome, and then, if it’s a long flight, outright boring.

So, we’ve put together a list of 11 airlines that offer in-flight WiFi in the US, so you can plan your trips accordingly. It’s that or the book.

As well as offering WiFi though, there are other things to bear in mind, like are there also power sockets to keep your gadgets charged? Or is there even enough room in an economy seat to sit with your laptop out in front of you? If not, you might be better off planning on using a tablet, or just sticking to your phone.

Many of the US carriers that offer WiFi do so by using the Gogo in-flight Internet service; costs are mostly the same for each airline, but availability can vary. The pricing listed (unless specified) is for turning up and purchasing on the day, not buying a pass in advance from the Gogo website, although, if you’re a frequent traveler you’ll probably want to do that.

It’s worth noting though, if you were planning on catching up on Breaking Bad on Netflix, or indeed, streaming almost any other kind of video content, you’re going to be out of luck. Due to the bandwidth constraints, only Gogo’s own Entertainment on Demand service (and carriers’ own options, of course) can be watched on board. This content is stored locally on the plane and streamed via WiFi to you via the portal, using far less bandwidth. Support for Entertainment on Demand will vary according to the carrier and route you’re flying too.

The exception to this is YouTube, which a Gogo customer service representative told me “should be fine for shorter clips as they consume less bandwidth”. There’s no VoIP services allowed either, Gogo confirmed, but that’s at the airlines’ request apparently.

The question you’re wondering though is: “How fast is it?”. Sadly, due to the range of varying factors, Gogo didn’t want to give an exact figure for the speed but did say that it’s typically around that of a “mobile broadband” connection. 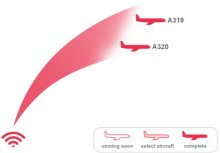 Virgin America uses the Gogo in-flight service to power its Internet options and provide Web access to passengers on its Airbus A319 and A320 planes.

It’s available on all of its flights throughout the US and prices range from $2 for thirty minutes access on a mobile device all the way up to a $39.95 per month Traveler pass, accepted on all Virgin America flights but not other airlines that use Gogo’s service. The Traveler pass will get you unlimited access. Pricing packages, including tiers in between, are available once you’ve passed 10,000 feet and can log on to the portal, as is the case with other airlines.

While the service is available throughout the US, passengers flying to Mexico will lose service within 100 miles of the US border.

Happily, every seat also has a power outlet, so running out of juice shouldn’t be a problem. Unless you forgot your charger. 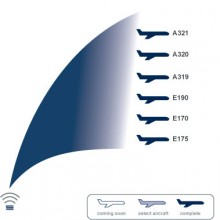 As US Airways also uses Gogo’s service, the pricing remains very similar, with US Airways saying that full Internet access (rather than mobile-only) starts from $4.95. Pricing for Gogo’s Traveler pass is the same $39.95 per month for US Airways, and will continue to renew until cancelled.

Availability is a little more restricted than Virgin America’s, at least in terms of percentage, but US Airways still offers Internet access on around 90 percent of its flights. Access to usairways.com is free.

There’s sometimes the option of power on board, but it’s best to check if your planned aircraft and seat grade will get you what you want. The option is more widely available on its international flights. 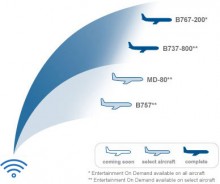 The American Airlines (AA) service is priced the same as Virgin America and US Airways as it uses the same service, but it’s the first airline we came across to provide a link to the specific different deals you’ll be able to buy on-board without actually needing to be above 10,000 feet to do so. Given that they range from the same $2 for 30 minutes of mobile-only WiFi access to $49.95 for Gogo’s Unlimited Pass, it’s a safe bet that these general packages cost the same regardless of which Gogo-equipped airline you’re using.

Nonetheless, there are airline specific options too – in this case the standard AA Traveler pass for $39.95 per month (recurring) and an AA Day Pass which ranges from $14-$21.95 and covers a 24-hour period.

AA also offers WiFi on some of its international flights too, but only on its newest Boeing 777-300ER plane. Internet access for international trips can only be bought on board and is priced at $12 for a two hour pass, $17 for a four hour pass and $19 for access for the duration of your flight.

Handily, AA also says it offers power outlets within reach of most of its seats on most of its flights too, naturally, Business and First Class passengers get a socket all of their own. 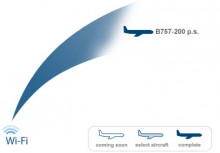 United Airlines has a less wide-reaching service than some of the other alternative options, but is offering WiFi on all its Premium Service transcontinental flights, available between New York (JFK) and both Los Angeles (LAX) and San Francisco (SFO). This is only in relation to its use of the Gogo service to power its WiFi for these specific Premium Service flights, though.

For the rest of its WiFi-enabled fleet, it uses its own WiFi service and bills at a flat rate that varies according to the route and the package you want. Monthly passes are not available, and Gogo passes are also not valid on these flights.

The power socket situation is a little more variable on United than some of the others too, so it’s worth checking that out before you book. 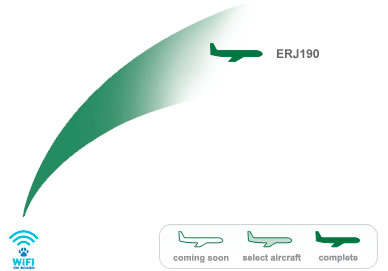 Frontier Airlines offers WiFi on 100 percent of its domestic Embraer ERJ190 aircraft’s flights. That’s all of them, though.

It’s also worth noting that Frontier operates its own on-board, chargeable DirectTV service priced from $3.99 for flights under two hours and up to $7.99 for flights over 3.5 hours. 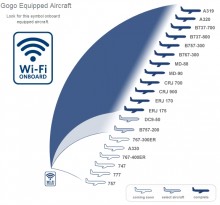 Delta has big things planned for its use of Gogo’s in-flight Internet access, and already offers it on some 3000 flights a day, on domestic routes across more than 700 aircraft. And there’s more on the way.

Like other Gogo-equipped services, you can get a daily or monthly pass, but unlike some of the other US airlines, Delta also offers an annual Gogo pass for all of its flights priced at $469.95.

As well as offering WiFi on its flights, Delta also has a couple of different charging options depending on what type of plane and what seat grade you’re sat in.

On domestic flights (where the WiFi service is operational), there are power outlets are available in First Class seats on select 737 and 757 aircraft, and all 767-300 aircraft 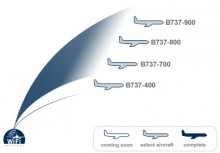 Alaska Air offers in-flight WiFi on nearly all of its flights in the lower 48 States and on “most flights” to, from and within the state of Alaska.

Pricing options are as-per the rest of the Gogo-equipped aircraft in this list, minus the annual Traveler Pass option offered by Delta above.

Unfortunately, Alaska Air says that none of its flights are equipped with in-flight power, so make sure your phone, tablet or laptop is charged if you’re planning on using them on board. 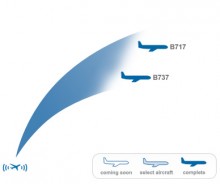 Southwest Airlines is one of the few in this list to use a different WiFi service for its domestic flights over the US and as a result it comes with a simpler pricing structure – simply, it’ll cost you $8 for one day of access.

Southwest is currently in the process of rolling out WiFi across much of its fleet, but until it’s a sure-fire guarantee, you can check and see if your flight will offer it using the WiFi Finder on the left-hand side of this page.

Operating as a subsidiary of Southwest, AirTran offers its in-flight Internet via Gogo on all of its domestic flights departing from the US and has already installed it on its Boeing B717 and B737 aircraft.

Sadly though, as with Alaska Air, there are no power sockets on any AirTran flights. 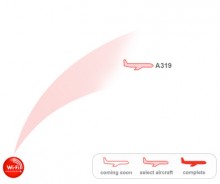 Air Canada also offers Internet access via the Gogo in-flight service, but only for passengers travelling between Toronto or Montreal to Los Angeles on A319 aircraft while over the US. So it’s quite specific.

While it’s powered by the same service as all the others, Air Canada uses a different pricing model which costs $9.95 for the duration of the flight or $7.95 for mobile-only access.

All Executive Class seats have a power socket, and if you’re in economy there’s two for every block of three seats.

Let’s get this out the way right now, JetBlue doesn’t currently offer WiFi on its flights.

However, since 2011, it has been working with ViaSat to create “the airline industry’s best broadband connectivity” with “exponentially more bandwidth than any other product in commercial aviation today”.

JetBlue said it expected the first of its WiFi-equipped flights to start in ‘Fall 2013’, so that’s right about now. Thankfully, the aircraft are also being upgraded with power outlets, too.