With the importance and power of technology shining through every major initiative in the past five years, early technology education is becoming more of a need in schools all over the world. From natural disasters to political campaigns, technology is at the forefront.

One non-profit called CodeNow has decided to take on bridging the gap between technology and underrepresented youth.

The organization explains itself this way:

CodeNow works with underrepresented youth to develop the next pioneers in technology by teaching foundational skills in computer science and programming to narrow the digital divide. Creating a fluency in this language spurs innovation and opens doors for our youth, while creating a pipeline of talent for American companies.

Since the movie “The Social Network” was released, people everywhere have gotten the tech sparkle in their eye, be it for an app they’d love to make or by changing the world. The power of technology, especially the backend skills required to make great ideas a reality, is in the hands of few. There are major companies in Silicon Valley hiring top talent as we speak, and there will be many jobs available for the youth of America if they have the right skill set.

CodeNow was featured on the White House blog, with Director of the Office of Public Engagement Jon Carson saying this about the initiative:

A few weeks ago, I had the opportunity to meet Ryan Seashore of CodeNow and I was immediately impressed with the work he and the organization are doing. Ryan got me thinking about ways that we could engage non-profits around the country and the ways we could share their incredible stories. I am happy to announce a new weekly blog series highlighting non-profits dedicated to improving their communities. It felt appropriate to have CodeNow inaugurate the series.

Here’s a video about the CodeNow program:

I had the chance to interview CodeNow Co-Founder Ryan Seashore about why this movement is important for the advancement of technology.

TNW: What is it about technology that gets you excited the most? 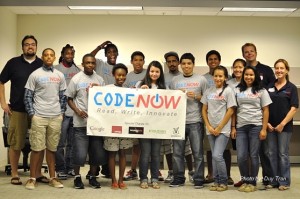 Ryan Seashore: What’s exciting to me about technology is that it gives people the ability to create, which is power. Programmers are modern-day artists constantly shaping the world we live in. The boundaries are as endless as their imagination.

TNW: Tell us why it’s important that the youth of America gets involved with technology early on

Ryan Seashore: Coding is the language of the future. If we want our youth to be competitive globally we need to teach them be tinkerers and look under the hood of technology.

TNW: What’s the story behind CodeNow and why did you start it?

Ryan Seashore: I’m a social entrepreneur with a diverse background in Film, Technology and Politics. I became involved in the Obama Camapaign overseeing youth outreach in SF and was forever changed. I moved to DC to work for the administration on an interim basis. After this amazing experience I decided to join the non-profit sector. I worked for an organization doing great work but they were stuck in the confines of being a “Non-Profit”.

Last year I came up with the concept for CodeNow. I expected to see dozens of organizations in the space. I was shocked to find only a few organizations teaching youth to code and no one focusing on undeserved youth in a scalable way. Out of frustration I started CodeNow in February of 2011. Though we are a non-profit we function more like a start-up. We take a “lean” approach to our work and are in constant beta. It’s been an amazing experience.

TNW: Please share some success stories since you started the project

Ryan Seashore: An early validation of our success is that after our pilot program in August I had 4 students friends email me about attending our next training. With high school students there is no higher praise. We’re still early on. We have three more trainings by the end of the year. We expect to learn a lot in the next few months.

The children are our future

Early education is essential to drive the next advancements in technology. It might not be a social network that changes the world, it could be a cure for cancer or another major disease and technology could be a contributing powerhouse behind it. It could be a 12-year-old girl in Iowa who has the thoughts and imagination to accomplish such a feat. Without an organization like CodeNow, she wouldn’t have the opportunity to focus on bringing that imagination to reality.