The space for mobile payments has heated up really fast over the past couple of years. One thing that we’ve started to see more of lately are applications that focus more on peer-to-peer payments versus something that you’d use to see a business. With PayPal implementing NFC, Dwolla providing software solutions to hardware problems and Venmo firmly in between all of it, the space is getting crowded quite fast.

But not so crowded, according to newcomer Clover, that there isn’t room for something new.

First off, you need to know that Clover is in a private beta, which just came into the world’s view today. The way that it’s set up, you’ll need to know someone who has access already and have them send you an invitation. Once you get invited, via and SMS to your phone number or in person via a QR code, Clover has apps available for Android and iOS.

Firing up the app, you will see a main screen that shows your current balance. Funds can be added to Clover via any credit card, but not directly from your bank or PayPal. You can choose to Pay, Request, browse your Contacts or Invite new users to Clover from this screen. 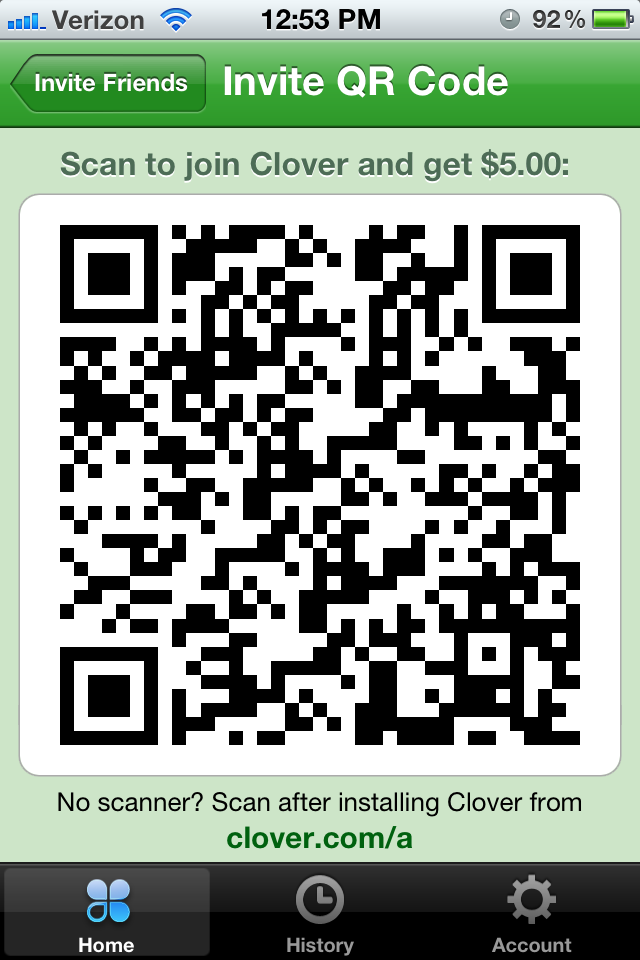 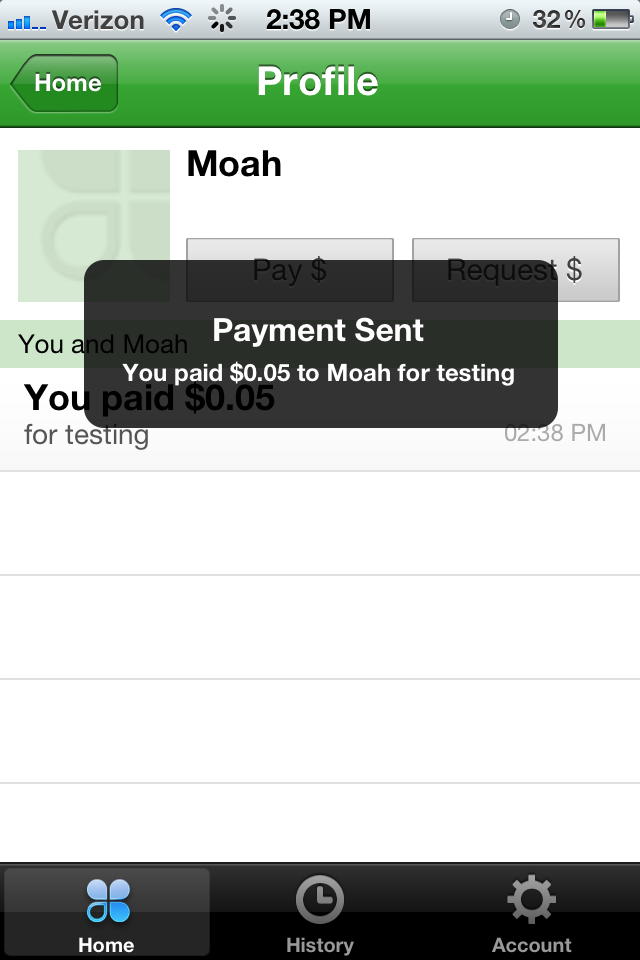 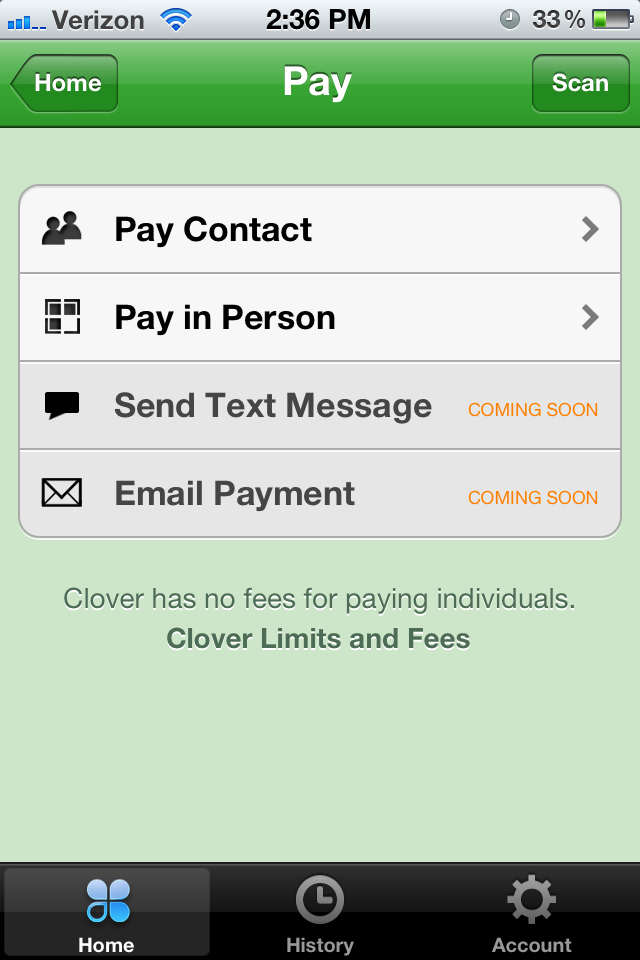 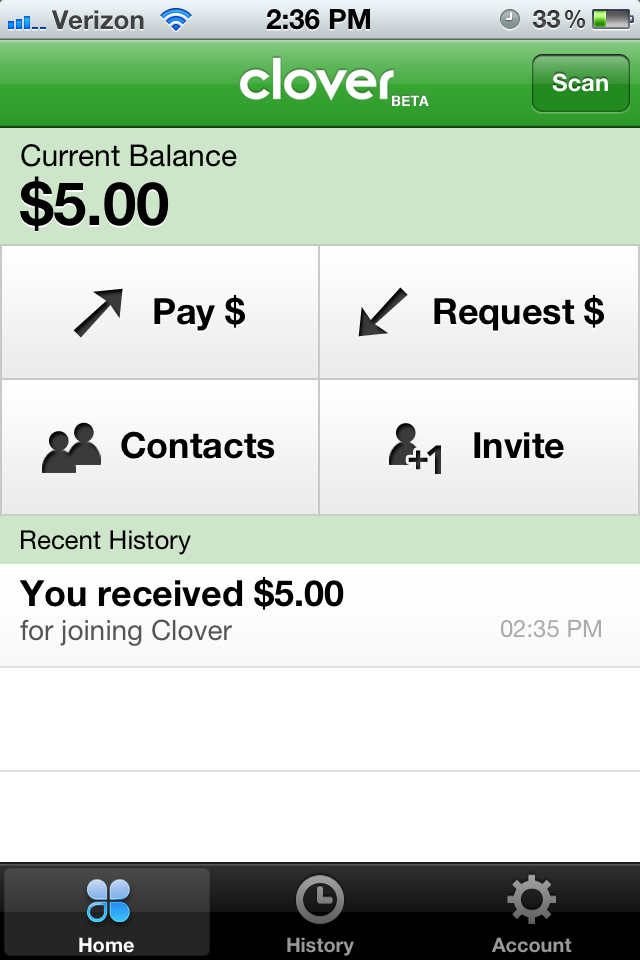 If you want to Pay, there are 2 ways to go about it. You can either pay a contact directly, or you can create a QR code that is then scanned by another Clover user to accept funds from you. This makes it easy to split a bill at a restaurant, for instance, but it also leaves the door open to long-distance transactions. In time, according to some grayed-out options in the UI, you’ll also be able to pay via SMS or email.

Requests for money work the same way. You can choose to ask in person, which creates a QR code, or you can send a request to one of your contacts. Again, SMS and email-based requests appear to be coming at a later time.

To withdraw, you can do immediate transfers to your PayPal, or a bank transfer in 2-3 days. Obviously, if you’re using PayPal, you’re going to get a fee tacked onto transactions. Bank transfers might have them as well, depending on your particular bank’s methods.

So that’s the basic rundown of Clover. But what’s interesting is how the company is going about its fees. There’s a breakdown on the site, but I’ve copy/pasted it here for you.

For personal or non-profit use, it works like this –

If you’re using Clover for your business, the fees come into play –

The fee structure alone should help Clover to get a healthy footing in the market, but I also have a sneaking suspicion that the team has more up their sleeves. We do know that there’s an API in the works, which will bring payment options to more apps and websites. Beyond that, the plans are still a bit in the dark.

So why not just use PayPal? According to Clover CEO Brian Lamkin, you’re probably not using it for quick payments anyway –

“…it’s not about what you can’t do with PayPal but rather what you don’t do with PayPal.  Over the past decade, PayPal has done a great job transforming how people think about payments, but most PayPal users don’t routinely use the service to pay each other for lunch, drinks, etc. from their mobile phone.”

That fast and easy idea is what you’ll probably notice about Clover from first boot. It really is incredibly simple to use. But in that fashion, so is Dwolla, so it’s going to take more than just easy to make things work.

If Lamkin’s name sounds familiar to you, there’s good reason — He’s a valley native who was previously the Senior Vice President for Yahoo’s Consumer Products division. He’s joined by other Valley-credentialed names such as John Beatty, Kelvin Zheng and Leonard Speiser who all worked at Bix before its Yahoo acquisition. Annie Lausier and Nagesh Susaria also join Clover from Yahoo. Mark Shulze comes from Quantcast, Marcus Westin from Meebo and that’s just to name a few.

Presently Clover is sitting on a $5.5 million investment from Andreesen Horowitz, Sutter Hill Ventures and Morado Venture Partners. With cash in the bank, a hot app on the market and a team that would make any startup drool, the future should hold fields of green for this new mobile payments player.

Want in? Find someone who is, or browse this article carefully. I’ve left a way for you to join me on Clover. Since, apparently, Clover gives me $5 for every referral, I’ll be donating that to Charity Water.