This article was published on January 1, 2013

Finding ways to keep track of what’s happening in the world and in various markets can be pretty difficult, especially on mobile devices. People are interested in seeking out new ways to allow them to get information that’s relevant and important to them.

Apps to help with this problem include Flipboard, a popular social news aggregator that has helped to change the way people consume content, Zite, Cir.ca, and Summly. Now, Clipped is seeking to take its place as one of those services and has launched its iOS and Android apps to help optimize the way people consume the news on their mobile devices.

An alumni of the Teens in Tech incubator, Clipped says that it delivers top news content in the form of bullet point summaries that it believes will “save users time and energy.” Its app also includes a summarized search engine that allows users to “read summaries about exactly what they want.” 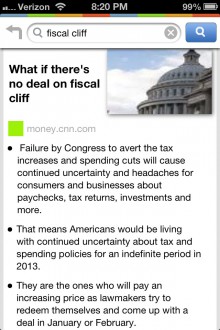 Created by Tanay Tandon, a 15 year-old entrepreneur who is a Natural Language Processing enthusiast, as a way to read evidence files in a debate class faster, Clipped’s original intent was to be something that the average teenager could use easily. He says that it was important for the user to be able to open up the application and immediately find the most important information in front of them. Instead of being subjected to pages of content about a particular story, such as the US “Fiscal Cliff”, sporting events, business opinions, anything else, wouldn’t it be better to just get it summarized for you in bullet points so that you can get the important parts and move on with your life? Summaries can be posted by users to Twitter and Facebook.

Tandon admits that Clipped’s attempt to aggregate and provide content is similar to Flipboard and Cir.ca. In a way, users might find that it’s most like an abridged version of Flipboard, something that Tandon agrees with because he says that it tries to keep people updated “a lot faster.” He explains, “someone in the finance industry might need to know what’s going on in a company, but doesn’t have the time to read an entire Wall Street Journal analysis. That’s where Clipped comes in – he can discover the statistics that matter, and work accordingly.”

Some may think that Clipped is similar to Summly, but Tandon disagrees. He tells us that Clipped’s algorithm is more grammatically focused and can be scaled to books, legal documents, and research papers. Instead of limiting the algorithm by looking for keywords in news articles, Clipped says it’s more focused on larger information analysis and comprehension experiment. 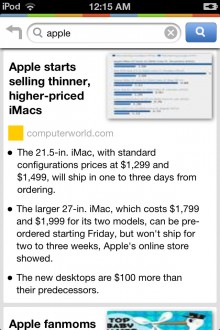 With regards to Natural Language Processing, Clipped believes that it allows it to generate comprehensive summaries of articles. As Tandon tells us:

The technology grammatically analyzes text, and discovers which sentence structures hold the most important information. The algorithm diagrams sentences through a Part of Speech tagger, and can determine which information is dependent on other sections. Through a combination of statistics and keyword analysis, we are then able to rank chunks of information and select which regions of the sentences are most relevant. Clipped then re-reads its summary and makes sure that the selected information contextually makes sense. The algorithm then returns the top information as a bulleted list for the user to read.

Clipped says it is aggregating information from across 30 sources, including the New York Times, Wall Street Journal, and the Washington Post.

The application uses technology that is a combination of “extractive keyword systems and grammatical analysis.” In this patent-pending process, Clipped says that it’s able to identify patterns that show concentration of information and selects these areas for further analysis. Then, it runs a grammatical analysis on the information to determine the dependencies in the sentence and discovers reference information from an array of databases. In short, the service looks at content like it was an editor focusing on the relevant parts and cuts the rest. What’s left is then arranged chronologically to make sure that it’s presented in a “sensible bullet point list.”

In addition to its mobile apps, Clipped has also released a Chrome plug-in and a browser bookmarklet for Safari, Firefox, Chrome, and Internet Explorer, allowing users to summarize webpages in bullet point form. Developers can also take advantage of  the service’s API that enables them to take advantage of natural language processing to any application. The company says that it will be “entirely open, unrestricted, and free.”

Clipped says it hasn’t received any investment for its product and Tandon has bootstrapped the company. He says that in the coming months, he hopes to raise money to help expand the app’s technology to other areas, including legal, scientific, and more.

The company will monetize the service through its API service and aims to begin offering its technology to news outlets as a way to share news articles across mobile devices.