Chute, a media-sharing startup, is launching a new product on Tuesday called Chute Ads. This service is designed to allow brands to serve interactive ads enabling viewers to interject their own media. The company has already signed Conde Nast Traveler as the first publisher to offer this new ad format within its network.

In addition, the company has announced that it has closed a $7 million Series A funding round led by Foundry Group.

$7 million to play with

For the Y Combinator alumnus, the additional capital will go towards helping to promote what it calls the “visual revolution” and tell effective stories that will appeal to consumers. It believes that it can help companies better figure out how to use and consume photos and videos in real-time.

While Foundry Group is leading this round, it also includes participation by two previous investors, Freestyle Capital and US Venture Partners. Foundry Group Managing Director Ryan McIntyre says that he was drawn to invest because of the “arsenal of developer tools” that Chute has:

At Foundry Group, we are deeply interested in companies that provide ‘magic infrastructure’ for developers that makes it simple for them to deploy complex yet elegant functionality at scale that integrates easily with their new and existing mobile and web apps.

With over 500 billion photos taken via smartphones in 2012, Chute’s cloud media platform enables brands, publishers and developers to participate in the massive visual conversation happening every day.

Chute tells us that it will be using the new capital to continue to improve and grow its product offerings and grow its team.

With this new ad platform, advertisers can have interactive ad units featured on their site that can have its creative easily changed, not by the agency, but by the people viewing them. In its initial stages, Chute says that it is reaching out to publishers to offer this service, although advertisers and agencies are also being looked at. 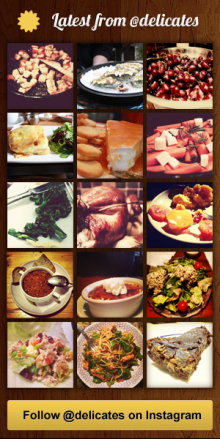 Starting with Conde Nast Traveler, banners can be placed on the network that allow photos and videos to be added in real-time. By this, marketers and customers can make the creative be something that’s appealing to them.

As an example, Nike might have a campaign running on Conde Nast’s network of sites. The sports apparel manufacturer could have a stock image featured, but invite viewers to upload their own image to fit the campaign.

Through the use of Chute’s platform, media could be uploaded from Instagram, Flickr, Twitter, and from your camera roll. What’s uploaded will be inserted for a long period of time, meaning that it’s not just for that particular browser session. How Chute will help manage user rights for this remains to be seen, but by doing so, these ads would not appear to be as bland as banner ads have come to be known for.

When it comes to advertisers, Chute says that its new product doesn’t require any additional software to work. It exports a standard file format that can be provided to any publisher and displayed easily.

The appeal to Conde Nast doesn’t appear to be that surprising, but with 2.9 million unique visitors to its site each month, the publication needs to find new ways to get people interested in its ads. What Chute might bring to the table is the renewed experiential experience — after all, its network of sites are all about emotions and perception. Ads for travel destinations, lifestyle activities, and other things are very visual in nature so being able to have people “put themselves” in the ad could be powerful.

Banner ads that matter to you

In using Chute, brands are able to import media files from not only a variety of services, but different sources, including pulling from hashtags. Advertisers who are interested in utilizing a Chute Ad will be able to select from one of several formats. We’re told that all that brands will need to do is provide a skeleton design and Chute’s service will overlay on top of it.

As shown above, there are different formats. One focuses on photos related to a hashtag, so if you’re promoting a show like American Idol, you might want to stream in media using the hashtag #IdolOnFox. Additionally, Chute Ads offers advertisers a “hot or not” style format so if you’re a restaurant and want food aficionados to be engaged, the ad might compare two food photos against each other to see what people think. Other formats include a streaming option that just continuously shows photos without any agency monitoring.

In short, these ads would be more appealing versus traditional ones that most people see today. What’s more, being able to showcase user content versus what advertisers want you to see could result in different interaction and clickthroughs.

Next step in helping brands use media

The release of Chute Ads comes just months after the company released its Chute Media Galleries enabling brands to create real-time photo walls. Beyond showcasing user-content in the physical space, Chute appears to be looking to bring it to the online space to help brands better monetize their presence.

It has raised $9.7 million in funding to date.